Lucija Zaninović shows off her medal

“I started off terrible in my fight for the bronze, but I rebounded and wanted to win more as I have showed. A European gold can not compare to a medal in the Olympics. This is a result of 10 years of hard work…The celebration will be great but we’ll celebrate when Ana takes a medal.” –Lucija Zaninović 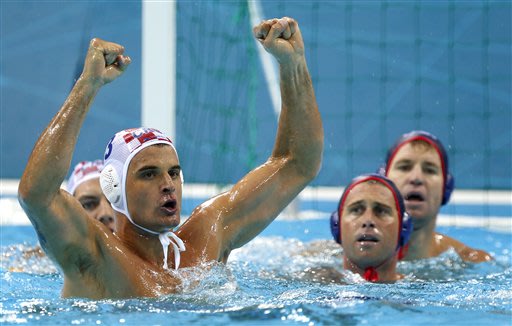 Miho Bosković celebrates one of his two goals against the U.S

We can do better although we played without any mistakes. This was our first important game in London and now the next two are the most important. We think we have the recipe to defeat Montenegro. –Andro Bušlje
We left our hearts in the pool. We only allowed one goal on the penalty kill, and we probably had 15 exclusions. The guys played great defense and the shots that got to me were not too tough. We won’t stop here, we have enormous confidence. –Josip Pavić

Croatia were roughed up by Tunisia
This was a dificult match, we have to congratulate Tunisia for their fight but we experienced things that shouldn’t be in Handball- squeezing,clawing, pinching us on the arms and kneeing us in the head. Regardless of that, we won. Also, we played a late match and had to wait for this match all day. – Igor Vori
The Tunisian team is known for this, they want to tear off your head. It was good that we withstood the pressure in the second half. We will regroup and prepare ourselves for the semifinals. If we will continue to play one on one, the French will beat us like monkeys. For the first time, we are not favorites. Maybe this will suit us. – Drago Vuković

“A week and a half ago, I felt a pain in my ankle and began to hurt me at the first attempt at 5.50 meters. I’m happy I jumped 5:35, I saw how it looks at the big heights. I was the youngest by far in qualifying,I have time, and at RioI hope to enter the finals and be among the top ten. If I went to the finals here, it would’ve been a surprise.”-Ivan Horvat