Athletics: During the Olympics four years ago, Sandra Perković was in the hospital fighting for her life after her appendix burst. These Olympics went slightly better for Perković, as she brought home Croatia’s first gold medal, winning the discus and setting a new Croatian record. She did it in dominating fashion as Darya Pischlnikova, who holds the world’s longest throw this year, failed to get anywhere near her best. Sandra’s first throw of 64.58 meters was good enough to put her in third after the first round. She followed that up with a massive throw of 68.11 meters, just 13 centimeters off of her personal best, that put her in the lead  with four throws remaining. She didn’t stop there though. On her next throw she smashed her personal best by almost a meter, throwing 69.11m, the second furthest throw in the world in 2012. It also beat her own Croatian record. On her next two throws, she could not improve from that mark, but there was no need. Pishchalnikova, who has thrown over 70 meters this year, threw 67.56m to move into second with one chance left to beat Sandra. Darya’s last throw was very poor, reducing her to tears, and Sandra went into her last throw having already won the gold medal. Sandra was overflowed with emotions as she did a victory lap around the stadium with the Croatian flag. It is Croatia’s first ever gold medal in track and field. 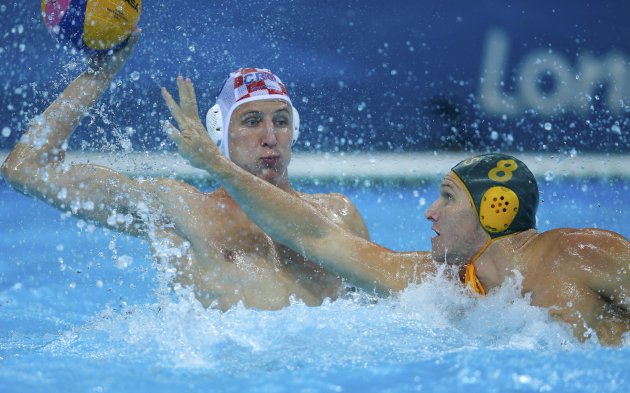 “Our form is improving. That’s the most important thing because no matter who comes from the other group it will be a very, very hard quarterfinal” -captain Miho Bosković

Igor Horvat scores one of his five goals

Tina Mihelić takes a spill early on in the Laser Radial