It was not relaxing, I’m pretty tired. We practiced our 5-1 defense which should be helpful for the quarterfinals. It was our first goal to qualify for the quarterfinals, and now that we are qualified, we want to continue. Ahead of us is the most important 60 minutes of our career. –Dijana Jovetić 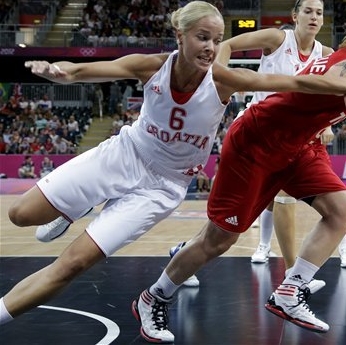 Antonija Mišura attempts to grab a loose ball
Women’s Basketball: The Croatian Women’s basketball team lost their final Olympic game to Turkey 70-65, giving them a 1-4 Olympic record. Croatia put up a good fight and led for a good portion of the first half. Croatia’s collapse came in the 3rd quarter in this game, where they were outscored 25-13. They put up a comeback in the fourth quarter but came up five points short. Ana Lelas led the team with 11 points as Sandra Mandir struggled, shooting 2-6 from the field and committing six turnovers. There were many positives for Croatia at these Olympics as they managed to keep every game close including games against China and the US. If Croatia can continue to play like this, their world ranking will certainly go up and they could be competitors at Rio de Janeiro in four years time. Croatia’s top scorer and best player, Sandra Mandir, will be 39 in 2016 and likely won’t compete, but the budding talents of Maria Vrsaljko, Luca Ivanković and Antonija Mišura will be entering the primes of their careers at the perfect time.

Lisa Stublić in the final .2
I love running in the rain. The course was challenging, although there weren’t many hills. The atmosphere along the course was great, but I couldn’t see the sights of London because I was focused on the race. -said the American born Stublić

A dejected Neven Žugaj walks off the mat

Anton Glasnović aims at a target