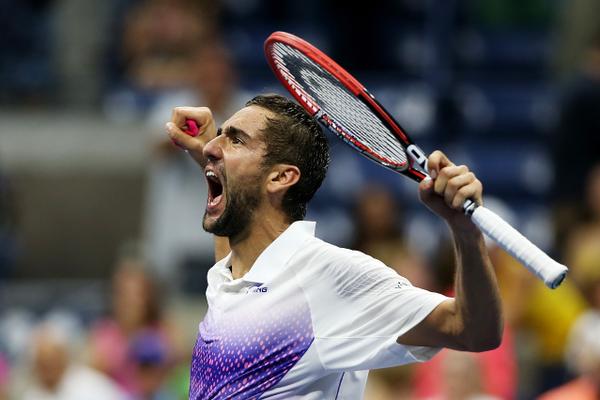 Marin Cilic faced a ranked Frenchman for the second straight match of his US Open title defense, and once again came out on top, dropping #19 Jo Wilfried Tsonga 6-4, 6-4, 3-6, 6-7(3), 6-4 to advance to the semifinals. Cilic relied on his big serve throughout the match, and despite a somewhat worrisome final three sets, the Croat advances to the semifinals of a Grand Slam.

Things went according to plan in the first two sets, with Cilic serving well, and picking up one break in each set. Things were a bit dicey at times in the first set, where Cilic faced five break points, but he held firm, and was more convincing in the second set, where he lost just three points in his five service games.

In the third set it was Tsonga’s serve that was unplayable, as the Frenchman lost four service points and allowed no break points. Cilic held firm on his own serve, until Tsonga wore him down and took the break at 4-3. The fourth set brought more huge serves by the attacking players, and neither man had faced a break point at 4-4. On Tsonga’s final two service games, he looked vulnerable, and Cilic nearly broke through, but ultimately failed to convert on three match points and fell 3-7 in the tiebreak.

The fifth set was also played fairly evenly, as both men had opportunities for breaks, but Cilic was the one who capitalized, taking the set and match 6-4, after Cilic attacked Tsonga’s second serve, with the Frenchman winning only 3 of his 11 2nd serve points (3 double faults).

Cilic will play his semifinal on Thursday, most likely going against Serbian rival and world #1 Novak Djokovic, who has advanced to the finals at five of the last six Grand Slams, and is 13-0 against Cilic. The last three times the pair met, Djokovic won in straight sets.