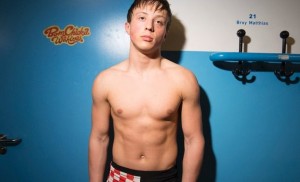 For the first time in the short history of the Ultimate Fighter series we will have a Croatian fighter as part of the cast. His name is Vladimir “Vlado or Sunshine” Sikic (10-0-1). The man known as “Sunshine” couldn’t of picked a better season to showcase his skills on. This season pinned as the Ultimate Fighter 22 USA vs Europe will feature the popular Irishman  and Interim champ Conor McGregor and Urijah Faber as opposing coaches. This installment of the series could turn out to be the most watched in the history of the show due to the coaching staffs immense popularity.

Sikic appears to be a true up and coming talent and is currently training and living in Germany. Sikic has an impressive undefeated record heading into the show and has already won a title in his young MMA career. Vlado just making it on the show is a big feat in itself. Here is his audition video that earned him a spot on Season 22.

Lets hope Sikic can bring some “Sunshine” and Croatian flair to the show and earn himself a contract to the best MMA organization in the world and the crown as the winner of Season 22 of the Ultimate Fighter.