Croatia secured two medals on the final day of competition in the 2012 Olympics, giving them six total, one over their record. They finished 34th out of the 204 nations in total medals and 16th in medals per person. Croatia earned 1.33 medals per million people, versus the U.S who received .33 per million.

After the Croatian Federation chose the quad sculls rowing team to carry the flag at the closing ceremonies, they rolled dice to determine which “Young Gun” would be given the honor. Damir Martin won and was the flag bearer.

The majority of the athletes will now return to their day jobs as they start to think about Rio. Croatia has much to be proud of after London as they continued to be perennial overachievers in sport.

Sandro Sukno made himself a household name in London

Men’s Water Polo: Croatia won the gold medal over Italy in yet another dominant performance as they capped off the Olympics 8-0 and on top. Croatia came in with perhaps too much confidence from their win over Montenegro and went down 2-0 early. After the early wake up call they were all over the Italians as they scored 7 of the next 8 goals to put the game out of reach. As Croatia coasted to the gold, Italy pinned a few back and the game finished 8-6. Italy outshot Croatia 27-20, but, just like the previous games, Josip Pavic came up huge as did the defense. Maro Joković led with three goals, Miko Bosković added two.

“What an amazing feeling! I can’t explain this. This is the top of the top!” -Captain Samir Barać

“We played amazing the whole tournament, I think there is no doubt we deserve this medal. We played the best water polo and had our finest performance in the last match. There will not be much sleep in the next two or three days.” –Miho Bosković

“Today, they played better than us. The gold medal is for them, absolutely, The defense of Croatia is very strong. They are strong in every facet of the game. They are the best team for sure. They win every match, very easily.” –Valentino Gallo (Italy) 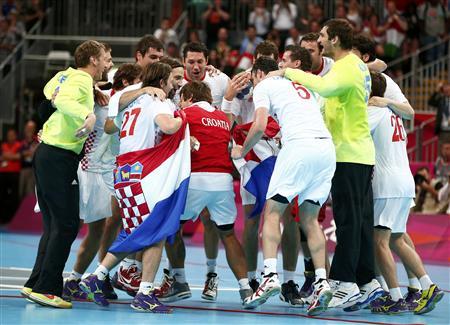 Men’s Handball: The Croatian handball team beat Hungary for the second time in these Olympics to claim the bronze medal after their disappointment against France, who went on to win gold. The “Cowboys” began to pull away about halfway through the first and never looked back as they won 33-26. Mirko Alilović played far better than he did against France, saving 32% and keeping his team in the game. Ivan Cupić rediscovered his form after a disappointing semifinal to score eight goals from the right wing. Sharpshooter Blazenko Lacković scored seven and Domagoj Duvnjak added six.

“We could have done better but we showed our character in this game. We played as a team and we deserved the medal.” –Ivan Cupić

“We worked hard together for the past two months, so I want to congratulate the guys, I’m not easy to endure, but I’m really happy for them as well as for myself and all the fans that we won the bronze medal. This is our record for most medals at the Olympics” –Slavko Goluza, Croatian coach

Croatia’s medalists will come home to a hero’s welcome:

After an exciting summer with the Euros and the Olympics, the soccer season is getting underway and qualification for the 2014 World Cup will begin in September for Croatia. They take on Switzerland in a friendly on Wednesday in what will be Igor Štimac’s first match in charge.