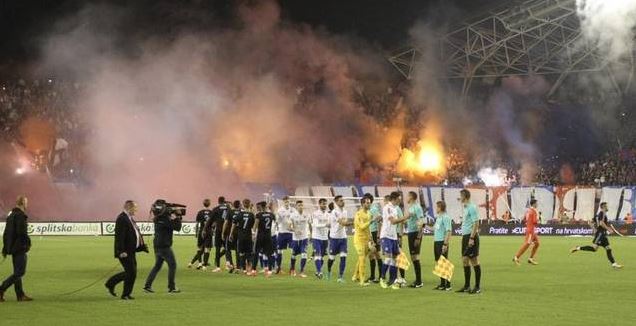 The weekend was dedicated to the Derby in Croatia. Dinamo Zagreb  traveled to Split to remind everyone that this league does produce excitement while Osijek took on Rijeka at Rujevica and handed them a 2-1 loss at home.

20,000 fans packing in Poljud to watch Hajduk face Dinamo on Saturday evening. Torcida showered the pitch with streamers (or was that toilet paper?) before kick off, which was accompanied by fire in the stands and the on the field.

The derby had everything expected from this classic clash of Croatian clubs; fan misbehavior, last-minute goals, altercations on the pitch, and a little break during the match for the firefighters to clear the flares from the field of play.

Ante Erceg put the first threat of a Hajduk lead in the spotlight with his chance running down the left flank, creating a corner kick. Erceg would be hailed as the man of the match for his performance on Saturday, scoring the team’s first goal of the night.

Erceg’s goal came in the 38th minute after corralling a cross and splitting the Dinamo centerbacks with two touches, scoring a goal that left goalkeeper Dominik Livaković frozen in place.

Erceg’s goal looked to be the game winner after Dinamo was unable to counter the score with a goal of their own, but in typical Modri fashion, Dinamo managed to find an equalizer in the dying minutes, much like they did against Osijek last week.

Filip Benković won the second ball in a fee kick, using his head to power in the goal from about 10 yards out. The goal looked to promise a draw, but the magician, Angelo Henriquez managed to spike another goal in during the opening seconds of stoppage time. Henriquez has scored four goals since being largely forgotten and sent down to Dinamo II.

The two-goal flurry by Dinamo sucked the wind out of the sails at Poljud, but a poor challenge from Petar Stojanović gave Erceg a chance to re-tie the match from the penalty spot; a chance he did not squander, making Livaković look foolish in his attempt to save it.

Hajduk appealed for a second penalty call seconds later, but went ignored by the officials.

Several gatherings of players occurred throughout this match, and turned into shoving matches, which resulted in seven yellow cards issued throughout the match. The cautions only added exclamation points to the rivalry that has been fueled for decades.

The match ended 2-2, splitting the points among the teams.

Sunday’s match gave way to a thrilling upset at Rujevica. Rijeka welcomed Osijek into town, but surely regret it after falling 2-1 to the visiting team.

Mario Gavranović put Rijeka in the lead in the 55th minute, but it was Eros Grezda who tied the match in the 62nd minute. Petar Bockaj would be hailed a hero for his game winner in the 79th minute.

The victory puts Osijek tied with Hajduk on points for third place. Dinamo maintains a six-point lead on Rijeka, who in turn maintain a one-point lead on both Hajduk and Rijeka. 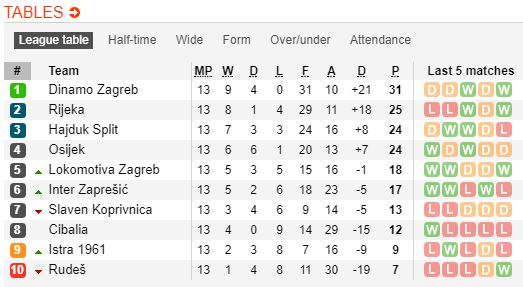