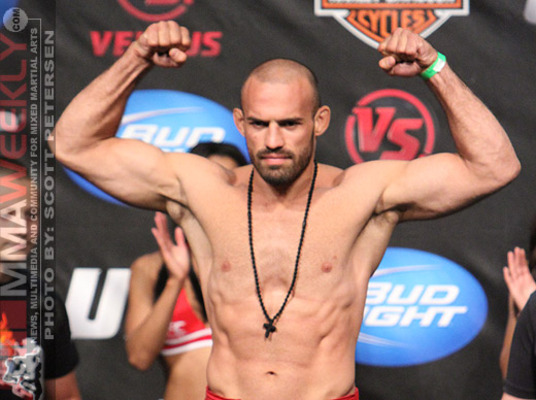 Igor Pokrajac was gracious enough to give the Croatian Crippler an interview prior to his bout with Fabio Maldonado Tuesday night. The weigh-ins took place on Monday and both Pokrajac and Maldonado weighed in at 205 pounds. The fight will be featured on the main card of the UFC on Fuel Tv 3 card taking place at the Patriot Center in Fairfax, Virginia, USA. This fight has the makings of a true barn burner with both combatants known for their aggressive stand-up game. Tune in to watch Pokrajac try and extend his winning streak and his goal of becoming UFC light heavyweight champion.

The fight will be live on Fuel Tv in the United States and on Rogers Sportsnet in Canada tomorrow May 15th.  Enjoy the Interview!!!!

Training camp was great, had some new things in my trainings that made me more complete than before and I’m fighting now for MMA Academy Only Men Stuff.

2. Did you bring anyone in to the camp to get you ready for the fight?

I didn’t bring anyone in because we have  great MMA fighters in Croatian Top Team and Croatia.

3. Is there any truth to the news that you are training with Mirko CroCop again?

He called me and asked if I can  help him and come for a sparring session, I said yes and went for only one training session.

4. How did you feel when the UFC pulled Thiago Silva out and replaced him with Fabio Maldonado?

I’m doing my job and who ever they put in front of me I will fight and bring the fans what they want.

5. Any comments on your opponent Fabio Maldonado?

Great boxer coming from the Noguiera Team with solid Brazilian Jiu Jitsu and hart of a warrior.

6. How do you see this fight ending?

I’m not a fortune teller to be able to tell you that.

7. If you win this fight do you think you are ready for a top ten opponent? And who would you like to fight?

Like I said , who ever they put in front of me I will fight, my goal is a title shot , any of the Ex UFC champions will do.

8. The UFC extended your contract after your victory over Sozynski, how many fights were you given?

The contract is correct and I’m glad to be in UFC.

9. How do you feel you match up against Fabio Maldonado in the Striking game?

I’m evenly matched with his boxing.

10. Have you been following any of the other Croatian fighters in the UFC?

Of course , Perosh and Miocic are doing great, would be great that we fight on the same card one day, in Croatia.!!!

11. Your training partner Luka Jelcic is competing again in MMA, Do you see Luka in the UFC or another big organization one day?

Luka is a great fighter and right now he is competing in the Croatian MMA League , his position is to be on the UFC roster.

12. Are there any other prospects training at Croatian Top Team?

I have a lot of fighters , young ones, 18 and 17 years old, they just need to train and we will see who can go through.

13. There has been a lot of interest in your walkout shirt from UFC 140 on the site. Will your shirt be available for purchase?

Yes, I have a new walkout t-shirt and  it will be available for purchase at Kaiwaa site.

14. Last time we talked you commented on the up coming European Championships, Do you still see Hrvatska getting out of their group?

I don’t see in them that they want it, I would like more than anything to see them as champions , but Bilic already signed for another club, they want to change the president of HNS, lots of everything but not about football , not about Croatia, just interest.

15. In closing any thing you want to say to your Croatian fans on Croatian sports.com ?

Thank you for your support and watch me on Tuesday night, Good bless you all, thanks to you to Crippler.