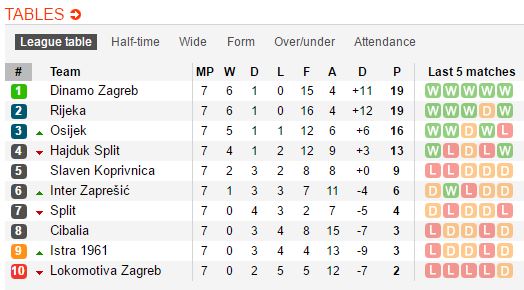 Routine wins came for Dinamo and Rijeka over the weekend, leaving the two clubs tied for the top position on the table while the Osijek re emerges as a league contender and sits three points behind in third place. Dinamo beat NK Istra 1961 2-1 in Pula, leaving the Puljani still in search of their first win while Rijeka soundly took care of Slaven Belupo 2-0.

Osijek remains undefeated after competing in its biggest derby in years, defeating Cibalia 2-0 in the Garden City.

Hajduk Split gave NK Lokomotiva yet another loss, defeating them 2-0. It’s been a tough week for Lokomotiva who suffered their first loss in European play and were eliminate from the Europa League. A similar result was held by Hajduk Split who were also eliminated last week. Several members of the Lokosi were recalled to their parent club, Dinamo this week, including Ivan Fiolić and Dino Perić. Goalkeeper Eduardo has officially joined Chelsea FC, and Ante Čorić is looking to make the move to Italy soon.