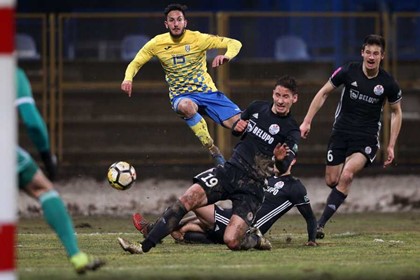 The HNL winter break has finally ended and began its 2018 play this past weekend.

The January transfer window has been a volatile one for some clubs, with big departures for Rijeka, Dinamo, and Hajduk.

Despite recent success, Rijeka had reported to fallen on some financial difficulties, and relied on the sales of Mario Gavranović (to Dinamo), Florentin Matei (Astra FC), Marko Vešović (Lega Warsaw), Josip Mišić (Lisbon), and Mate Maleš (Dalian) to cover debts.

But no club is in financial trouble like NK Istra. Istra released 18 players in January to clubs around both Croatia and Europe. The club was able to bring in several players to fill the void, and even managed to impress in some winter friendlies in Bosnia, but faced a harsh reality on Saturday when they fell 4-0 to Rijeka at Rujevica.

The weekend kicked off with NK Inter Zaprešić hosting NK Slaven Belupo on a freshly-shoveled field, courtesy of fans and players. Inter made a public request on Facebook Thursday for fans to bring shovels to the stadium and help clear the nearly five inches of snow that accumulated on the playing surface. The club even offered 20 kuna per our for the work. The plea was successful and the pitch was cleared with the help of Inter players and staff and was ready to host the next day. Inter and Slaven played to a scoreless draw, which also marked the debut of Slaven head coach, Tomislav Ivković, the same coach who brought NK Lokomotiva into their first European competition.

NK Osijek hosted Dinamo Zagreb, as they always do, for their first match of 2018. Dinamo led the match 4-0 by the 70th minute, thanks in part to a double tally by Arijen Ademi, but Osijek showed character and came within two goals on the Modri by the 77th minute. An appeal for penalty was made for Osijek, perhaps rightfully so, but Zoran Zekić was quoted after the match stating the decision didn’t matter. “Penalty or not, we would have lost, as Dinamo were the better team.”

Despite losing Angelo Henriquez, Domagoj Antolić, and Leonardo  Sigali, reinforcements like Gavranović and and Korean duo Kim Hyunwoo and Kim Gyu Heyong will help the Modri remain on top of the table.

Hajduk Split is now without Ante Erceg and Ivan Pešić, but easily handled HNK Cibalia with a 5-0 win in Vinkovci. Mijo Caktaš celebrated his return to the Bili with a 61st-minute goal.  Franck Ohandza scored twice in the match.

NK Lokomotiva played to a 2-2 draw with NK Rudeš at Maksimir on Sunday. Rudeš amz feel like two points were snatched from the hands of victory when the Lokosi clinched an 89th minute penalty, converted by Lovro Majer. Rudeš remains in last place. 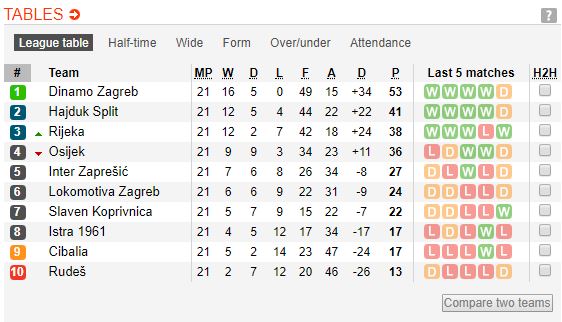