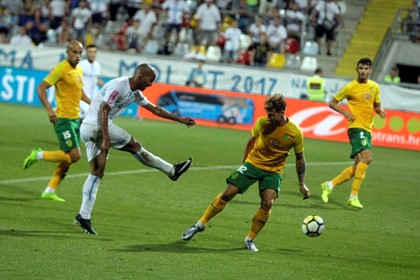 David Pulcin‘s name will be remembered by all Rijeka fans after their stunning loss to NK Istra 1961 in Pula over the weekend.

Pulcin scored the loan goal in the match in the 18th minute to bring Istra up a goal, which is how it remained for the rest of the 90 minutes. This was only Istra’s second win of the season.

Rijeka searched for the tying goal, and nearly found it – twice – but Pula defender Tomislav Culjak made two goal-line clearances to preserve the narrow lead; once in the 24th minute and again in the 89th minute.

Pula was without goalkeeper Ivica Ivusic for the final minutes of the match after he was shown his second yellow card, leaving Pula to resort to leaving centerback Risto Mitrevski in goal for the final minutes. Though it was no long enough for Rijeka to capitalize on the situation, and suffered their third defeat this season.

Dinamo Zagreb nearly suffered the same fate on Saturday, but managed to somhow find their way back from a late 1-0 deficit against Osijek.

Eros Grezda opened the scoring in the 17th minute and held the lead until Angelo Henriquez scored a crucial goal in the 94th minute of play on the final kick of the match. Dinamo remains without a loss this season.

Dinamo captain, Arijan Ademi made his triumphant return after his two-year suspension for doping. His suspension was reduced from four years, making him eligible to Saturday’s match.

Hajduk Split took care of business on Sunday, despite giving up an early goal to Cibalia at Poljud.

Tomislav Basic put Hajduk in the lead in the sixth minute, but was cancelled out five minutes later from a goal by Hrvoje Plum. Josip Radosevic won the match for the Bili in the 57th minute.