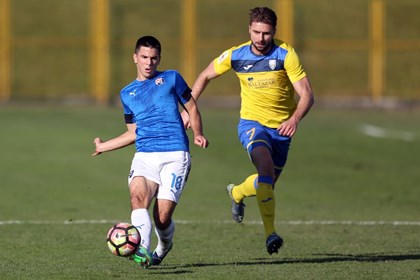 For the fourth time in the last five meetings, Dinamo Zagreb has defeated Inter Zaprešić with the score of 1-0. Ante Čorić scored the game’s only goal in the ninth minute and his second of the season.

Čorić will also be part Ante Čaćić’s squad to face Northern Ireland and Iceland in November.

Paulo Machado slipped the free kick on the ground to Čorić’s feet where he one-timed the ball into the goal from close range.

Dinamo may have stolen the three points with a clever goal, but they face a much more challenging task ahead Dinamo will travel to Spain for a match on Wednesday against Seville in the Champions League. Dinamo last met the team at Maksimir earlier in the month and fell 1-0 to the Spanish side. 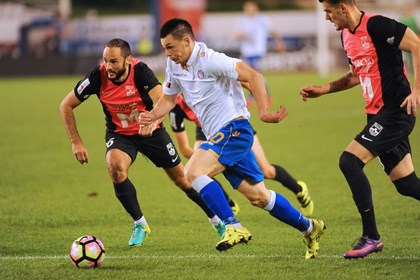 Hajduk Split was able to fight for all three points against NK Osijek on Sunday, defeating the challenging club 1-0.

Marko Futacs scored an impressive goal that gave Zvonimir Mikulić no chance of saving. Futacs met a long ball with the end of is foot to chip the shot over the diving Mikulić for the goal.

With the win over Osijek, Hajduk now sit in third place and Osijek in fourth.

One thing more important than a victory to the 10,000 that attended the match at Poljud was the celebration of 66 years for Torcida. The group, which was the first organized supporters group in Europe, displayed lavish tifos and pyro shows before and during the match. 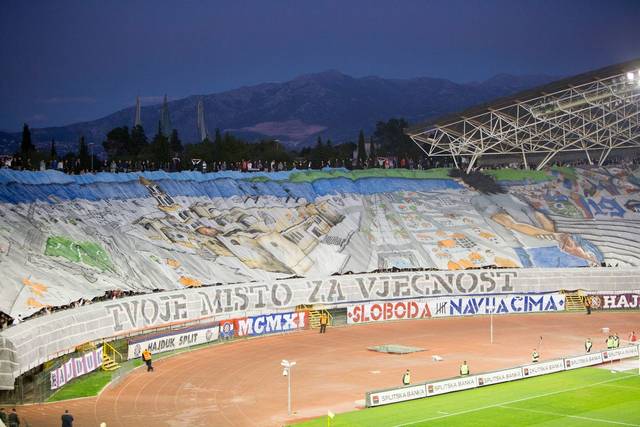 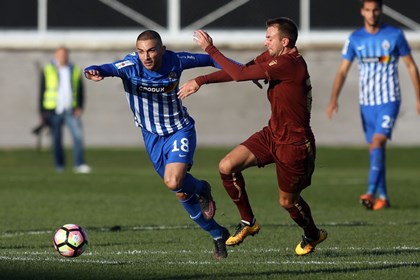 Rijeka remain league leaders after 14 weeks by securing three points against NK Lokomotiva. The Lokosi didn’t make it easy for Rijeka, who didn’t score until the 67th minute. Rijeka was looking for a big ambitious goal, but Lokomotiva held them down and kept the score tied at zero into the half.

Lokosi created several chances of their own in the first half, but Rijeka woke up by the second half and pressured until Franko Andrijašević was able to score off a volley from a corner kick to start the scoring.

Up 1-0, Rijeka wanted an insurance goal and foud it off the head of Alexander Gorgon.

Gorgon scored in the 78th minute after a free kick was lofted into the box. Gorgon headed the ball in past the goalkeeper, who he left crumpled in a heap on the ground.

Rijeka remain six points ahead of Dinamo in first place while Lokomotiva sit in fifth place. 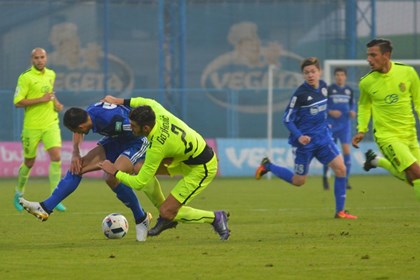 A rough start for the Istra marked instant damnation for the side from Pula.

Slaven Belupo scored two goals in the opening eight minutes of the match, which ended 2-0. It was a big mountain to climb and Istra was not up to the task.

Gordon Baric and Heber dos Santos scored the only goals in the game and gave Slaven the early and ultimate lead Though tied on points with Lokomotiva, Slaven sits in sixth place and Istra in eighth.

A battle for the basement is currently underway in Vinkovci, featuring the winless Cibalia and the nearly-winlelss RNK Split. The match started at 1 pm EST and was scoreless in the 29th minute at the time of publishing. 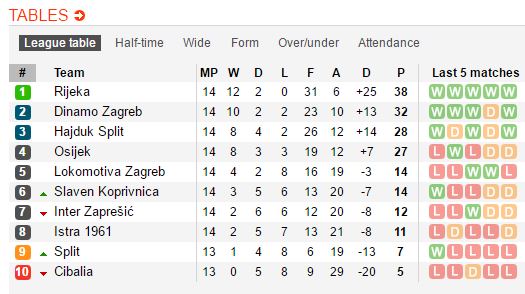