For those who follow 1.HNL, no one is sure what is more disappointing, Dinamo’s 1-1 draw against NK Istra 1961 on Friday afternoon or Rijeka’s inability to capitalize on Dinamo’s draw and played to a scoreless draw themselves against Slaven Belupo on Sunday.
Rijeka remains six points ahead of Dinamo, but failed to make it an insurmountable eight-point lead after an unremarkable trip to Koprivnica. 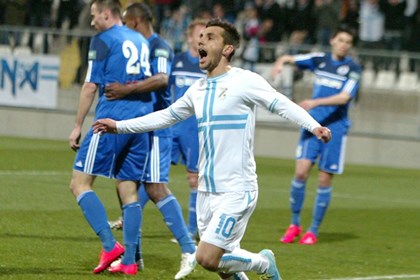 Rijeka’s defense was torn to shreds in the first 20 minutes of the match by the combination of Stefan Savić, Mirko Ivanovski and Heber. Savić put three efforts on goal and Heber tested Andrej Prskalo from distance, but were unable to beat the goalkeeper.

Rijeka’s first scoring opportunity did not come until the 30th minute when Marko Vešović tried his luck from long range.

Heber though he had a goal for Slaven, but the whistle was blown for off sides before the ball reached the back of the net.

Slaven remained in control throughout the match, keeping Rijeka on their heels. But even with 10 corner kicks and 58 percent of the possession, Slaven could not find a way to earn all three points. The teams were forced to split the points at the end of the match.

Rijeka midfielder Franko Andrijašević was issued a straight red card after the final whistle, and will be expected to miss the next match. 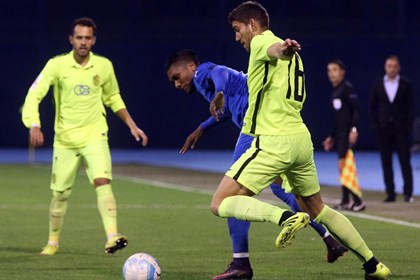 Dinamo Zagreb also missed a golden opportunity to close the gap with Rijeka, but failed to show any kind of true grit, presumably as they were distracted by the upcoming fixture against Lyon in the Champions League this week.

The two sides traded penalty kicks only one minute apart from each other for the only two goals in the match.

NK Istra started the match with a wide-open line up featuring three in the back line and five midfielders, while fielding two strikers up top. Despite the offense-heavy lineup, the first 45 minutes was mainly played in front of the Istrian keeper, Ivica Ivušić, who was kept busy throughout the half.

Dinamo’s penalty was called first and was scored by Junior Fernandes. His goal was quickly cancelled out by Goran Roce’s penalty one minute later.

Dinamo continued their domination of the game to no avail. Nothing would come of their half-chances and lackluster offense. Istra finished off the match with desperate defending and ball chasing while the teams split the points in the end, despite neither team deserving any of them. 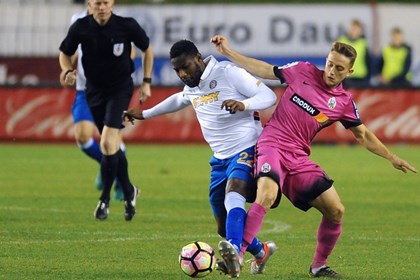 Hajduk Split played to the bare minimum needed to achieve victory. A 1-0 win over NK Lokomotiva was earned at Poljud on Saturday evening to give Hajduk three needed points.

Lokomotiva was eager to showcase their new coach, Mario Tokić, who replaced Tomislav Ivković, who departed from the club … again … recently. Tokić’s tactics started off strong with a flurry of offense from the Lokosi, but eventually died down at the hands of Hajduk, who showed their dominance against the weaker side.

Gambian international Hamza Barry scored his debut goal for the Bili in the 61st minute. The midfielder on loan from Cyprian side Aoppolon Limassol has had eight appearances for Hajduk. 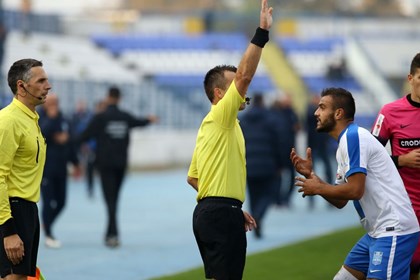 A goal from Muzafer Ejupi opened the scoring for Osijek in the 61st minute. Seconds before the final whistle, Gabrijel Boban scored a second goal for Osijek thanks to a blunder from Cibalia keeper, Mladen Matković. Matković stepped off his line to clear a passing ball and stumbled on his approach, leaving nothing between Boban and the goal.

Osijek are only three points behind Dinamo. 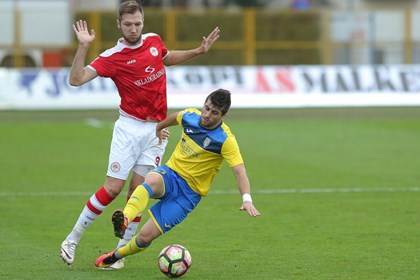 Kolar’s first goal came from a blunder from goalkeeper Tomislav Duka. Duka, one of the few consistent starters and solid players that wears a jersey for the club, attempted to play the ball with his feet, but gave an easy ball right to Kolar who slotted the ball in to make it 1-0.

Kolar’s second goal came from a great deal more skill. Kolar out ran two Split defenders to beat them to the ball, then chipping it over a sliding and desperate Duka for his second goal. 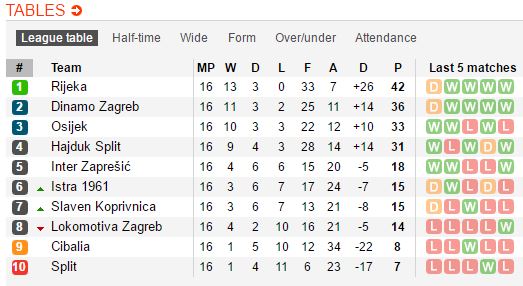