Ćiro’s heros brought embarrassment upon Dinamo at Kranjčevićeva as they shut the Croatian champions out 1-0 on Sunday. This was the first victory for Zagreb over Dinamo since 2009.

What was called the “Impossible Mission” by the media, they defied all odds with the help of the God they call Ćiro. Ćiro earned his first points with NK Zagreb as their coach against Dinamo.

“Zagreb must keep major league status, and they do not deserve to be in last place. They have quality players, and they have the coach of all coaches, Ćiro Blažević. He will do everything and anything to surprise Dinamo,” Dinamo coach Ante Čačić said before the match.

A formidable offense was on the field for Dinamo as well as their strongest four in the back line. All signs pointed to the Modri coming out victorious in this derby, but the match is certainly not played on paper.

NKZ coach, Miroslav Blažević has been confident in his team from the start. He has stated his team has the greatest keeper in the league. That young goalkeeper, Dominik Livaković recorded his first shutout and has a bright future ahead of him.

The match remained scoreless throughout the first half. Dinamo maintained the bulk of possession, but Zagreb kept their defensive tactics tight and allowed Dinamo little space to work with in the final third of the field.

Zagreb also relied heavily on counterattacks to threaten their opponents.

In the 50th minute, a quick counter from NKZ resulted in a goal from striker Besart Abdurahimi.

Damir Šovsić brought the ball into the box and placed a perfect cross across the goal where the Dinamo defenders could not reach it. The ball met Abdurahimi’s foot and was redirected past Ivan Kelava, who looked completely helpless.

Several minutes later, the NKZ attack struck again. Hrvoje Štrok gained control of a bouncing ball in the box and beat an awkward Kelava who could not control it and tapped it in the net to make the game 2-0. To Zagreb’s dismay, the goal was ruled offsides and called back. Further look at the replay showed that it was the incorrect call and The Poets should have doubled their lead.

Where does this leave Dinamo? They had no answers for Zagreb in the match. Their attacks were futile and were met by 10 men on defense.

Their frustrations rose and made matters worse.

Safet Nadarević made things a little tougher for his club as he was shown a straight red card for shoving Fatos Beqiraj down behind the play.

The Poets didn’t flinch even with the disadvantage and held on until the end.

Surly this will be the end for Ante Čačić. Their Champions League campaign ends in December, and you can bet we will be seeing a replacement for him soon.

We must give credit where credit is due, though. Zagreb has come leaps and bounds from a mere few months ago. Blažević truly is the coach of all coaches and is proving to be the miracle worker the boys at NKZ have been looking for.

Osijek’s strong defense was able to hold off the Hajduk attack for 90 minutes, but they were unable to generate any offense of their own.

The two clubs have given up the fewest goals in the league, with Hajduk conceding 13 this season, and Osijek allowing only 15. Fans expected a low-scoring affair.

Hajduk’s offense completely dominated possession. Despite the scoreless match, the majority of the match was played in front of Osijek’s net. Possession doesn’t win matches, thought, and Hajduks quality scoring chances were few and far between.

The home team was able to counter the offensive attacks by bunkering down and allowing few shots to reach the keeper. They did a fine job creating frustration for their opponents.

The Bili were certainly prepared for a difficult match in the Garden City. Hajduk has not achieved three points at Osijek since 2008. In fact, that was the last time the visiting team claimed victory between the two sides.

Osijek finished the match with zero shots on goal, but they still created several scoring opportunities.

Hajduk dropped from second to third place in the standings after receiving only one point on Saturday, and Osijek remained in seventh. 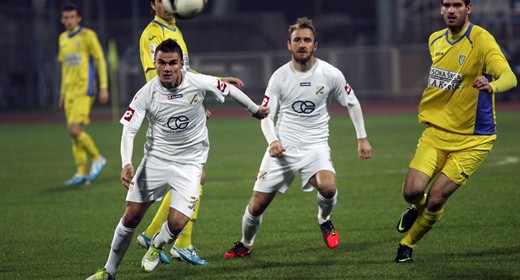 Leon Benko was the hero at Kantrida, scoring the game tying and game-winning goals late in the game.

The match appeared to be more of a rugby match with keepers, rather than a soccer game. Both teams executing reckless and unnecessary tackles resulting in 10 yellow cards issued throughout the 90 minutes.

Inter’s Miroslav Oršić struck first, scoring in the first half. After receiving a through ball from the mid field, he beat the last defender and fired a surprisingly quick shot from 25 yards out. The dipping ball caught keeper Robert Lisjak off guard and rocketed past him into the net.

Goalkeeper Krševan Santini had an outstanding game and looked as if he would earn a shutout by the way he was playing. In the first half, he faced shot after shot from close range and stopped every singe one, at one point stopping a series of three shots off three rebounds. He also bravely saved a one-on-one and kept his team in the lead; something that would change later in the game.

Rijeka seemed more motivated after the beak at half time. They came out with more passion and desire and controlled the game and fended off the brutally tough and physical play from Inter.

Benko found some particularly good form as of late and made the best of his hot streak on Saturday.

His first goal came in the 68th minute when Danijel Cecarec brought the ball into the box and selflessly passed the ball off to Benko who trailed behind him. He hit the ball on the first touch for the tying goal.

The first goal gave him confidence for another one that he scored in the 76th minute to win the game.

Inter has been in spectacular for as of late as well. The team had struggled greatly for the first quarter of the season, sitting in the relegation zone for weeks. They certainly have turned it around.  Coming into the game on Saturday, they have had only one defeat in the last nine matches, and have steadily climbed the ladder on the league table.

Rijeka is no stranger to an early-season struggle either. With such high expectations for the club in the beginning of the season, they seemed to disappoint their supporters, but bounced back and became the club everyone expected them to be. They now sit in second place in the league with 30 points.

A historical win for Lokomotiva took place on Saturday as they for the first time in club history defeated Slaven Belupo.

Slaven entered Maksimir with a record of three wins and four draws against the emerging club who have only been in the 1.HNL since 2009 after three consecutive promotions, starting in 4.HNL.

Injury-riddled Slaven had much to worry about, being without several regular starters for the club including Nikola Rak, Ante Batarelo, Borislav Pilipović, Davor Vugrinc, Alen Maras and Vedran Purić, and with Mario Gregurina and Igor Bubnjić questionable. Once again, coach Roy Ferenčina did his best to field a strong team.

The Lokosi struck the net in the 25th minute when Domagoj Antolić tapped one home after receiving a pass and finding himself in front of a near empty goal.

The lead was short-live though. Martin Saban cleaned up the rebound from Mateas Delić’s shot from distance minutes later.

The half ended with the teams tied, but Tomislav Barbarić put the Lokosi up just as the second half was beginning.

Andrej Kramarić finished off the match with a penalty that was awarded in the 70th minute.

RNK is unstoppable at home. No matter who it is, they don’t lose. They continued their great form at Youth Park against Istra on Saturday, winning a 2-1 thriller in Split.

Henri Belle scored the opening goal in the 69th minute. Belle came on as a sub only 10 minutes prior, but made an immediate impact and put his team on the board after nearly 70 minutes of scoreless soccer.

Igor Pamić’s side from Pula was desperate to attain at least a single point. In the 86th minute, the have seemed to achieve their goal. Goan Roca scored the game tier late in the match.

The game seemed to be ending in a tie when newcomer Ivan Radeljić headed a ball off a corner kick that found its way to Radeljić. Radejlić made the best of his debut for RNK and put in the game-winner and take all three points from Istra.

Zadar earned a huge win over Cibalia on Saturday with a score of 4-1. The win was so huge that Cibalia coach Zeljko Kopić offered his resignation after leading his team into a tough loss.

“I just feel a moral responsibility to offer my resignation. Unfortunately things do not develop as planned. When the team repeatedly plays at a poor level, I must not be giving my best as a coach, and there is no other option,” Kopić said. “Since my arrival I have spoke of a lot of trouble. At home games we were able to fix some things and get positive results, but away games are too weak and not in character. The majority of players do not abide by the agreed rules, do not respond in accordance with my instructions as a coach, and that has not the first time. It is a moral obligation to give my mandate because I know Vinkovci expects good results.”

The match that lead to his resignation began with Antonio Mršić scoring in the 17th minute. Cibalia was able to hang on for the majority of the game after. Stipe Parica doubled the lead at the start of the second half, but Cibalia put on pressure and forced an own goal by Marcel Heister to make it 2-1.

Zadar made sure that Cibalia was not going to tie the match. In the 87th minute, Perica scored his second goal of the game, and three minutes later, Luka Begonja added insult to injury and scored again in the 90th minute.

Cibalia sits two points ahead of Zadar on the table in 10th place. 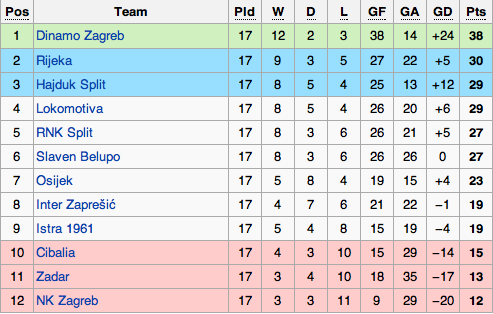