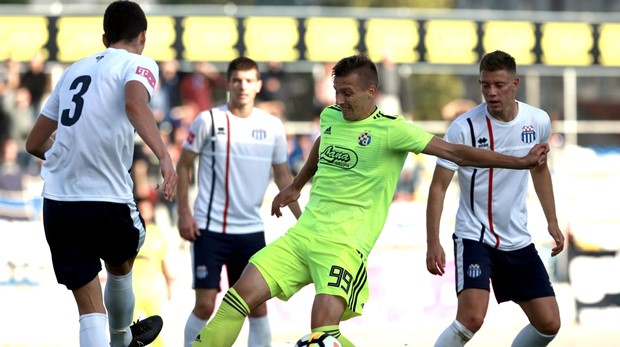 The second half of the season is upon us and the race for second place is in a dead heat.

Dinamo Zagreb sit at the top of the table with a 14 point lead that was just increased with a 7-2 shellacking of NK Rudes at Maksimir on Friday, which included a hat trick by Mislav Orisic. Orisic scored three goals in seven minutes to record the fastest hat trick in Dinamo’s history in the HNL (just one minute slower than the league record; Davor Vugrinec holds the record). But the real entertainment will be the battle between Osijek, Lokomotiva and Rijeka who are all tied on points for the moment. 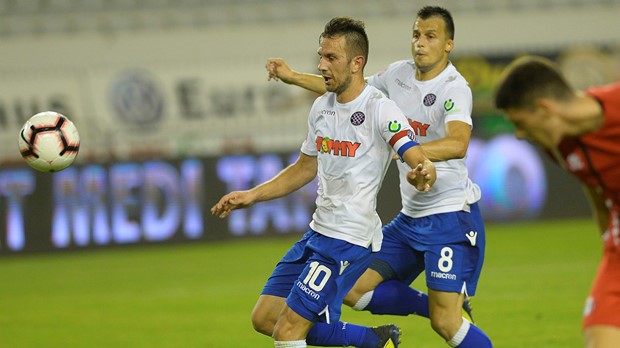 Despite a 1-0 loss at the hands of Hajduk Split yesterday, Osijek remain in second place on goal differential. A lone goal scored by Mijo Caktas in the opening minutes of the second half sealed the deal for the Bili, who fought hard for their sixth win of the season. Despite the win, Hajduk remain in sixth place.

NK Lokomotiva kicked off the season half of the season on Friday with a narrow 2-0 win over Inter Zapresic. The score remained 0-0 through the 80th minute before the Lokosi found the back of the net by way of Myrto Uzuni. A second goal came 10 minutes later from a penalty converted by Luka Ivanusec. Lokomotiva move up to second place with the win combined with a shock loss by Rijeka.

Rijeka welcomed HNK Gorica to Rujevica Sunday and took an early lead with a goal from Boady Acosty in the sixth minute. But Rijeka seemed a little too confident with the early lead and allowed three unanswered goals from Gorica, resulting in a 3-1 loss. Gorica sits comfortable in fifth place, but is creeping up in the table on the heels of Rijeka.

NK Istra 1961 played to a 1-1 stalemate against Slaven Belupo at Aldo Drosina. Istra gained the lead in the 64th minute, but Slaven newcomer, Ivan Krstanovic scored on his debut for the club to tie the match. Slaven is the seventh club of the 36-year-old Krstanovic has played for. 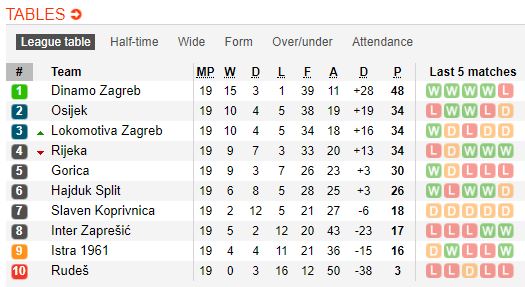