The match week started off on Friday with an exciting draw earned by Slaven Belupo. HNK Šibenik went up 2-0 before the break, only to allow two goals in quick succession upon the restart. Slaven’s Torless Knoll and Miroslav Illičić scored in the 43rd and 44th minutes to bring the match to a draw. Neither team were able to find the game winner and split the points in Koprivnica.

HNK Gorica also continued their efforts to remain in the top three with a convincing 3-0 win over the struggling Lokomotiva on Saturday at Kranjčevićeva. Matthew Steenvoorden kicked the scoring off in the 10th minute, followed by late game goals by Matar Dieye and Josip Mitrović.  Gorica sit comfortable in third place, five points behind Dinamo and Osijek.

Varaždin completed the minimum needed to take three points away from a trip to Pula, winning 1-0 over Istra thanks to a goal from Matej Senić. Varaždin made it difficult for themselves after one of their own, Marko Stolnik, was sent off in the 58th minute, but were able to stave off the pressure from Istra and saw the match end in their favor.

The marquee matchup this weekend took place on Sunday where Osijek hosted Rijeka. Ramon Mierez scored in the 25th and 69th minute for Osijek while the defense kept Rijeka’s attack at bay.

Though Nednad Bjelica claims to be quite pleased with the result, Rijeka staff and players will be asking questions regarding Rijeka’s goalkeeper, who was shaky at times and was directly at fault for one of Osijek’s goals.

Osijek are currently in second place, but are tied on points with league-leaders, Dinamo, who have also played one fewer match than Osijek. Rijeka are fourth place, six points above Hajduk but are looking up at Gorica, who are 11 points ahead.

The match between Dinamo Zagreb and Hajduk Split has been postponed to a later date. 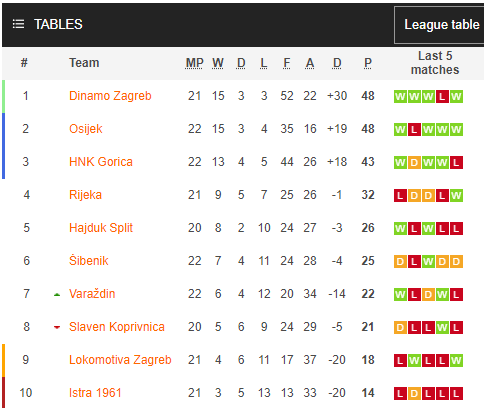