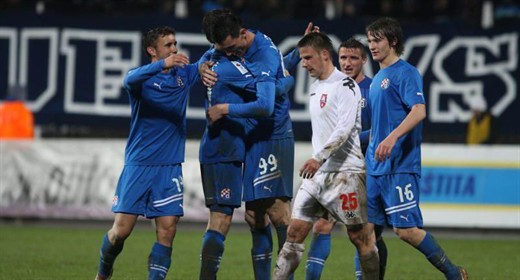 Dinamo Zagreb payed a visit to Kranjčevičeva street on Friday to face their neighbors NK Zagreb.

The last time these two teams faced each other at the Poet’s home ended in a surprising defeat of Dinamo. The bad news for Zagreb was that, the scorer of the winning goal in their last victory over Dinamo and team-leading scorer, Besart Abdurahimi, was unable to play due to yellow card accumulation.

Zagreb faced their opponents with no fear during the first half of play. Dinamo had the number in possession, but it was Zagreb that looked threatening. Defender, Dino Bevab had an attempt on goal for the Poets late in the first half, that quite nearly put Dinamo behind. Bevab’s laser of a shot struck the cross bar, but certainly gave Ivan Kelava a bit of a scare.

Dinamo gave keeper the young Zagreb keeper, Dominik Livaković, little to do other than a single save off a soft shot from Arijen Ademi.

The second half saw Dinamo come to life.

Kruno Jurčić decided to rest Alen Halilović after the half, and replaced him with Fatos Beqiraj. Beciraj instantly jumped on the opportunity, and scored within a minute of entering the game, putting his team up 1-0.

Replacing the injured Duje Čop was Ivan Krstanović, who has recently been in fantastic form, scoring five goals in his last six starts, including Friday’s match. Krstanović found the back of the net twice with his head, and continued his scoring streak.

The six-and-a-half foot tall striker put his height to good use, and scored with his head from a corner kick. His second goal, however, had him bent over and nearly diving to get his head on the ball to flick it in the goal to solidify Dinamo’s victory.

“We were better the whole game and we deserved to get the win. In the beginning, it was difficult to play when I was alone in the attack, but once Bećo scored – it was easier,” Krstanović said.

Krstanović is a former NK Zagreb standout, and lead the HNL in goals in his final year with the club in 2011.

Dinamo’s defender, Šime Vrsaljko was injured in the Zagreb Derby. The young right-back limped off the field after 20 minutes of play, and was replaced by Said Husejinović. Vrsaljko should be fit to return to the field by next week. Ademi’s condition is a little more serious.

The midfielder was also injured in the derby, tearing his quadricep muscle. He will continue to undergo evaluation. 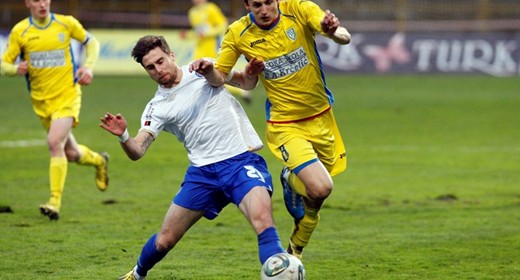 Hajduk Split faced a tough opponent on their trip to Zaprešić on Sunday, and came out with fewer points than expected.

The Bili entered the match hoping for the full three points to stay above Rijeka, who have been breathing down their neck for the past several months, but Hajduk have had recent struggles with Inter, drawing them 1-1 early in the season, and narrowly escaping with a 1-0 win at Poljud.

Inter pressed hard the entire match, and really threatened Hajduk several times with shots from Ante Budimir and Mislav Oršisć, both hitting the woodwork of the goal. It would eventually be Hajduk who first took the lead when Franko Andrijasović struck at goal and beat 20-year-old goalkeeper, Mate Delač, who is on loan from Chelsea FC.

Inter applied some unconventional tactics against Hajduk in order to obtain points on Sunday. The home team tried to out-muscle their opponents, and physically beat them on the field. Surprisingly, Inter went unpunished the entire match by the referee, much to the disdain of Hajduk.

“Let’s look at a snapshot. Inter turned to abuse during a match and scored. To me, as a sports official, it is important to bring my boys home alive and well, and I admit that I was there on several occasions to get into the field,” assistant coach to Hajuk, Ivo Separovic, said after the game.

“It was really rough. The referee took no action against any infraction and at least one, if not two, should have been red cards. Unfortunately we have not received a goal from the penalty before the end of the game, either,” Adrijasevic said.

It was not until late in the game that the referee decided to blow his whistle when Inter’s Haris Hajradinović was fouled in the box in the 86th minute. The home team was awarded a penalty kick that Ante Budimir used to tie up the game at one goal a piece, and forced Hajduk to split the points.

“Our goal is to win the Cup. We will not surrender until the end. I hope we have more luck with injuries and absences, because that means we will be more complete. Milović Jonjić, Milić, I paused, Maloča and Vuković were not with us in Zaprešić …. and it is in fact our biggest problem,” Andrijasević said.

Hajduk continue their road trip to Koprivnica on Wednesday to take part in the first leg of the Croatian Cup semi-finals against Slaven Belupo. The match was originally scheduled to be played a week ago, but was rescheduled due to poor field conditions after heavy rains. 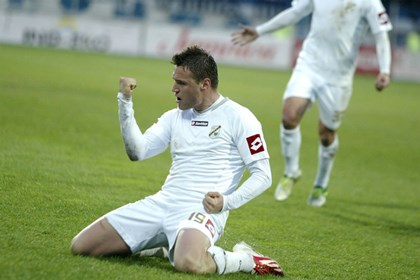 Can Leon Benko be stopped?

The 29-year-old striker from Varaždin has hit a stride this season with Rijeka, scoring his 15th goal of the season, and 12th goal in the past 13 matches. This goal also his sixth game-winning goal scored on the year.

Benko’s 31st minute goal won all three points for Rijeka, which moved them up to the sole possessors of second place, knocking down Hajduk to third. Rijeka has been eying a spot in Europe the whole season, and it is looking as if their aspirations may come true.

Danijel Cesarec had the assist for Benko’s goal. The Cesarec-Benko duo has been working wonders for the club this season, combining for nearly half of the team’s goals.

Osijke’s stingy defense might have let up a goal, but they were confident that that was the only one that will be let up by them in the match. The visitors did their usual thing in the back line, and kept any additional chances from Rijeka at a minimum.

Osijek traveled to Kantrida on Saturday with hopes of breaking not only a seven-game losing streak, but also their seven game scoreless streak. Osijek has not scored a goal since the 83rd minute of the match against Dinamo Zagreb on February 10. Osijek won that game, but have not won a match since.

Their few attempts on goal did not faze Rijeka, and the team known for not giving up goals, was once again, unable to score any either.

Osijek started their season off promising, but are now only four points from the relegation zone. 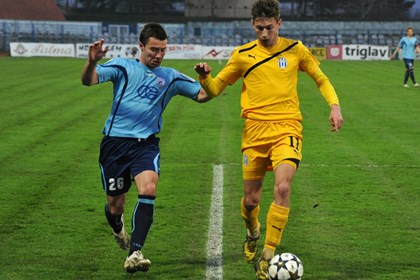 Cibalia pulled in the upset of the week with their 2-0 victory shutout over a tough Lokomotiva team.

The Lokosi wished they could have won the three points, as it would have sent them tied with Riejka for second place, leaving Hajduk Split in fourth. But it was the home side that took all three points, and probably even appreciated them more than any other team this week. Cibalia’s three points brought them up to 10th place, one point away from safety, which the club is desperate to reach.

“I congratulate the guys on the desire and aggressiveness presented, especially on the difficult terrain. Already a couple of times I have announced that we will not surrender and we must do our best to fight to stay in the league,” Cibalia coach Miroslav Bojko said.

The two teams have been familiar with each other over the past week. The two teams met only a few days prior to the match and faced each other in the first leg of the Croatian Cup semi-finals on the very same field. The clubs drew 1-1, but Cibalia came out the victors in the second match.

Cibalia’s plan of attack focused around possession of the ball. They controlled the pace of the game with the possession, and it paid off.

First, with a penalty awarded that Tomislav Mazalovic scored on in the 20th minute, and then in the second half, Petar Filipović finished a shot that doubled his team’s lead.

The teams will face each other a third time on next week in Zagreb for the deciding leg of the semi-finals. 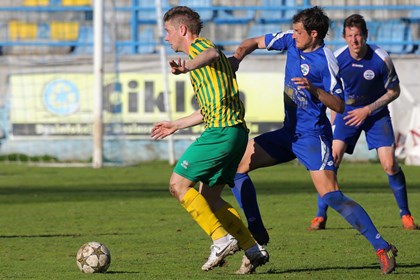 Istra’s six-game unbeaten streak has come to an end this weekend, despite taking the lead in the 20th minute with a Goran Roca goal.

Zadar’s Stipe Perica scorec in the 50th and 60th minutes to go ahead, but Hrvoje Milić tied it back up for the visitors. Josip Ivančić score the game-winner for Zadar in the 76th minute to take all three points in the match.

It was a somewhat emotional victory for Zadar in front of 1,000 of their fans, as it was the fifth anniversary of the death of former Zadar striker, Hrvoje Ćustić. Ćustić passed away in the hospital on April 3, 2008, after sustaining a major head injury during a match at Zadar’s Stadion Stanovi.

He was born and raised in Zadar, and began his youth career with the club that he would ultimately end up with. After graduating from their youth system, he spent time at Hajduk before moving back to Zadar, then spending time with NK Zagreb.

The Croatian under 20 and U21 international played with the likes of Luka Modrić and Eduardo, while being coached by Slaven Bilić.

Ćustić returned to Zadar for the 2007/08 season. On March 29, 2008, Cibalia visited Zadar for a league match that Ćustić started in. During the match, Ćustić was chasing down a ball when he and a Cibalia player collided, and he was knocked into a concrete wall that separates the fans from the field, and is located only several feet away from the field.

Ćustić struck his head, and immediately began to experience seizures and was rushed to the hospital where doctors performed surgery and induced a coma. Ćustić was expected to pull through, but his condition unexpectedly and rapidly deteriorated, leaving him brain-dead and on life support. The next morning, Ćustić died at the age of 24.

His bright and promising career was taken from the sport and as well as his fans and family far too early. His life will be forever remembered in those who knew him and saw him play. 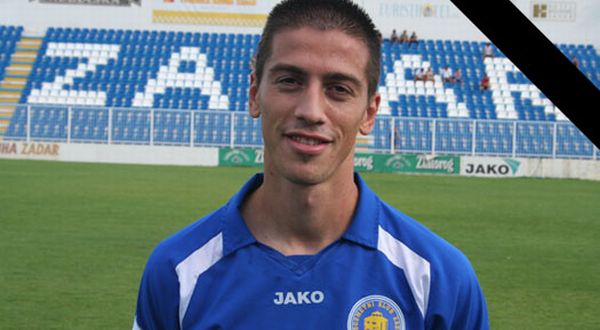 Slaven welcomed Split to Koprivnica and the teams split the points in a scoreless draw.

Split coach, Zoran Vulić anxiously admitted that Slaven was the better team and that they were happy to take a draw at their home.

Slaven will go on to welcome Hajduk Split into Koprovnica on Wednesday to face them in the first leg of the Croatian Cup semi-finals. 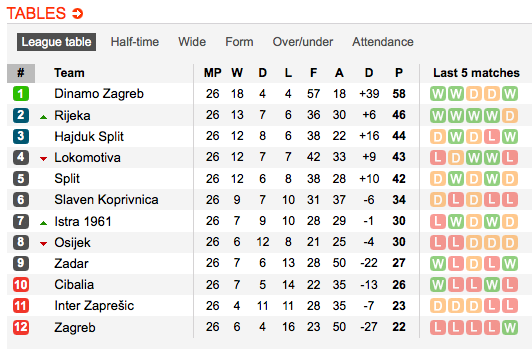