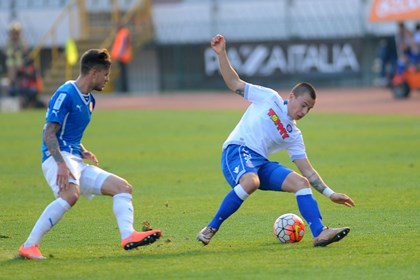 If the start of the NCAA tournament hasn’t provided you with enough upsets yet, well here is the one you’ve been waiting for: Hajduk Split defeated Dinamo Zagreb on Sunday at Poljud with a score of 1-0. This is the first time Hajduk has defeated Dinamo since September 14, 2013.

The two sides met each other only four days prior in the Croatian Cup semi final match at Poljud, with Dinamo winning 2-0, but the meeting on Sunday was a whole different experience for the competing teams.

Dinamo’s Marko Pjaca was unable to participate in the match after breaking his collarbone during the cup semi finals. This gave Angelo Henriquez the starting spot for Dinamo on top, but it made no difference as Dinamo was shut out by Hajduk.

Fran Tudor scored the match’s only goal in the fourth minute of play.

Tudor made an un-marked run up the center of the field and received a well-placed ball from Tino-Sven Šušić and beat Eduardo in a one-on-one situation for the goal.

Nikola Vlašić nearly doubled the lead in minutes later with a fierce shot from the edge of the penalty area. Vlašić’s shot ricocheted off both posts before being controlled by Eduardo.

Dinamo had several chances as well, coming from both Henriquez and Goran Schildenfeld, but neither was able to capitalize on their opportunities.

Hajduk kept up their initial open play and despite holding the slight minority in possession, had stronger control of the game throughout the 90 minutes.

Two groups of BBB traveled to the stadium from Zagreb, but violence erupted en rout to Split between different factions of the group. The majority of the BBB were stopped by police and sent back to Zagreb.

With the win, Hajduk still sit 13 points behind Dinamo in third place. 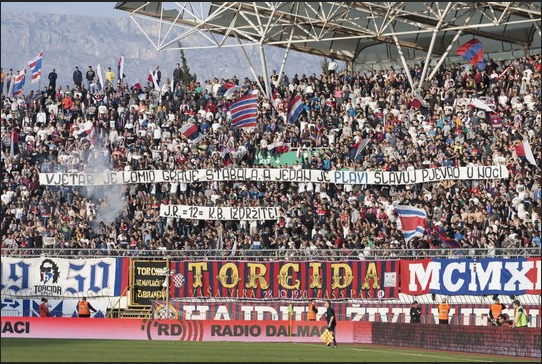 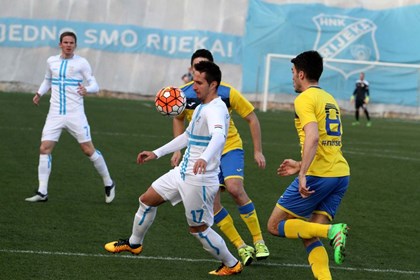 HNK Rijeka on the other hand now sit only 2 points behind the Croatian champions after defeating NK Inter Zaprešić at Rujevica on Saturday.

The 4-0 win for Rijeka was brought on by four different goal scorers.

Marin Tomasov started the scoring off early in the fourth minute of play with a curling shot from the top of the box.

Mario Gavranović followed suit with a 17th minute goal with a tap in from inside the six-yard box.

Miral Samardžić and Bekim Balaj rounded out the third and fourth goals in the 65th and 66th minutes of the game.

Samardžić scored an impressive goal off the volley after brining down a long distance cross with his chest and one-timing it in to the net from 18 yards away.

With the win, Rijeka now close the gap between them and Dinamo and will face Slaven Belupo in Koprivnica next week. 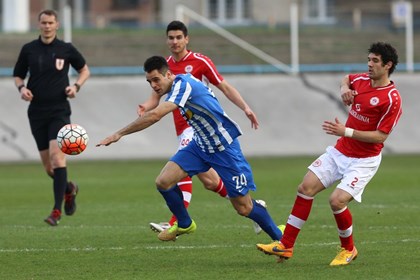 As usual when the Croatian Giants play, the Mali Derbi takes place between Lokomotiva and RNK Split.

The two smaller clubs of their respective cities drew 1-1 at Kranjčevićeva on Sunday with a score of 1-1.

Herdi Prenga scored in the 56th minute for the Lokosi to give them the 1-0 lead, but saw their lead vanish in the 76th minute after Petar Franjić tied the match up.

The teams split the points and remain within one point of each other on the table. Split sits in fourth place with 41 points and the Lokosi are behind them with 40.

Two goals from Muzafer Ejupi helped Slaven Belupo down NK Istra 1961 in Koprivnica on Saturday while two goals from Alen Grgić gave NK Osijek the win over NK Zagreb in the Garden City on Friday. The wins helped Slaven and Osijek distance themselves from the relegation zone, while the two losing teams dug themselves further into trouble. 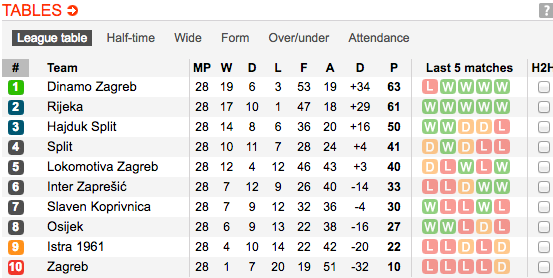