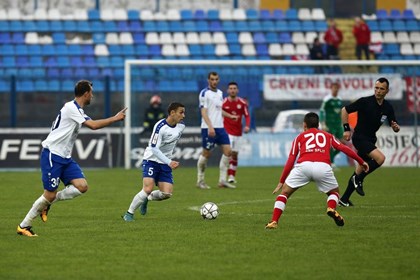 The week started off on Friday with a 0-0 draw between NK Osijek and RNK Split in the Garden City.

Both sides were without their starting goalkeepers, but the respective second-stringers did their part to record clean sheets for their team.

Aljoša Vojnović was awarded a penalty kick in the 13th minute, but could not beat 23-year-old Tomislav Duka, who was in net to replace the injured Danijel Zagorac.

Duka made the save to continue the 0-0 battle and Split entered in a more attacking frame of mind and dominated possession while pressing for a goal.

The goal never came, but Ivan Pešić came inches from scoring, but just sent his shot over the cross bar.

Mate Topić put forth a good effort in the final minutes of the match to take home a win, but his shot went just wide of the net, ending the match without a goal. 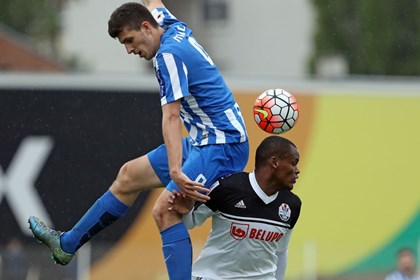 NK Lokomotiva kicked off Saturday with a 2-0 win over Slaven Belupo at Kranjčevićeva.

The Lokosi climbed to fourth place with the win, advancing over RNK Split, who drew in the previous day.

Mirko Marić scored an early goal that put the Lokosi up 1-0 in the fifth minute, thanks to a team effort that gave him the space to take on the goalkeeper one-on-one.

Marić beat the keeper who chose to attempt the save with his feet rather than his hands, and made him pay.

Slaven responded right back only a minute later with a similar play at the other end of the field, but Oliver Želenika stayed strong and made the save from close range.

Slaven was given another opportunity with a free kick that led to a near goal, but again, Želenika was there to make the save.

The confidence of the Pharmacists was booming after their big win over Rijeka to reach the Croatian Cup finals, but it was unfortunately not enough to earn any points.

Slaven only made matters worse for them after Nikola Pokrivač was sent off in the 68th minute for his second infraction of the day.

Lokomotiva solidified their win in the 80th minute with a goal from Endri Cekici. Cekici scored from just outside the box while falling down, putting a pinpoint shot into the bottom corner of the goal. 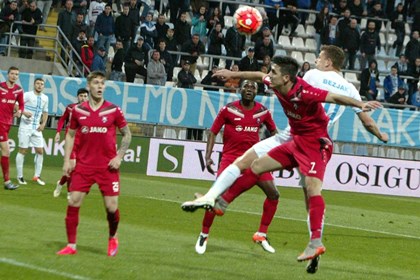 HNK Rijeka remains in a title chase with Dinamo after defeating NK Zagreb 3-0 at Rujevica on Saturday.

Filip Bradarić kicked off the scoring in the 19th minute and was quickly followed by Roman Bezjak in the 21st minute.

Rijeka were feeling the pressure from the fans after being eliminated from the Croatian Cup by Slaven Belupo in the semi finals.

After 2-1 in the first leg, Slaven came roaring back and took the second leg 3-0, sending Rijeka home without a chance to see the Cup finals.

Armada, the ultras group that supports the team, set up a banner in their section saying “We will cheer just like you play”, and left the stand void of any supporters.

Rijeka made up for the 3-0 loss with a 3-0 win that was capped off by a goal from Florentin Matei in the 51st minute.

Despite several chances from the visitors, the Poets were unable to find themselves on the score sheet and suffered their 21st loss of the season.

“I continue to believe,” Zagreb’s Gabrijel Boban said before the match began. “As long as there is a chance, we will not give up. Point against Rijeka does not mean too much, we are interested in victory.”

Boban has been one of Zagreb’s most consistent players this season, but believes his frustration of losing will translate into better results. 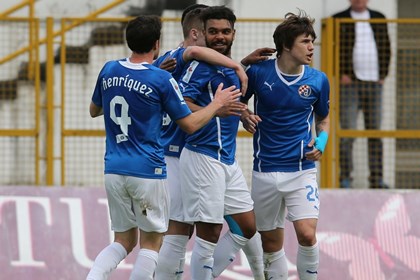 Dinamo fought for a 1-0 victory over NK Inter Zaprešić on Sunday, despite the home team giving Dinamo early trouble.

Zaprešić were looking for a goal early on and gave goalkeeper Eduardo some work to do in the opening minutes of the match.

Eduardo was called upon three times in the first 10 minutes and kept Inter off the score sheet.

The tables turned in the next 10 minutes as Dinamo had several oppertunites in a short span of time to score, but were denied by the Inter defense, goalkeeper Ivan Čović, and the cross bar.

It was the doings of Ivan Čović who kept the deficit at a minimum throughout the match with his strong goalkeeper, but in the 41st minute, he was beat by El Arbi Hillel Soudani to make the score 1-0.

Čović out shined the other 21 players on the field in the second half, keeping the game 1-0 when it could have easily been 4-0.

Unfortunately for the 25-year old goalkeeper, The Inter offense was unable to create a goal, leaving Dinamo with the minimum victory of 1-0. 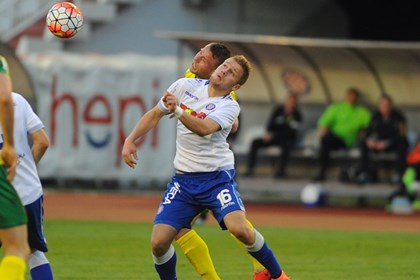 The troubles continue for Istra as the find themselves on the losing side of a 3-0 score line against Hajduk Split at Poljud.

“We have played very poorly in the last two games, Istra defender Renato Gojković said. We are currently in a difficult situation but we must hold our heads high.”

Brkić gave up his first goal of the match to Lorenco Šimić off a corner kick. The next goal came from Tino-Sven Sušić at the penalty spot.

Brkić took down Josip Juranović in the penalty area, giving Hajduk its first penalty shot of the day, which was converted by Sušić to make it 2-0.

Gojković made a similar mistake it the 74th minute and took down Ivan Mastelić, giving Hajduk its second penalty opportunity of the day, which was also converted by Sušić to make it 3-0. 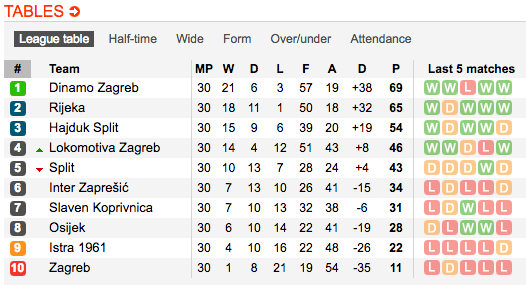