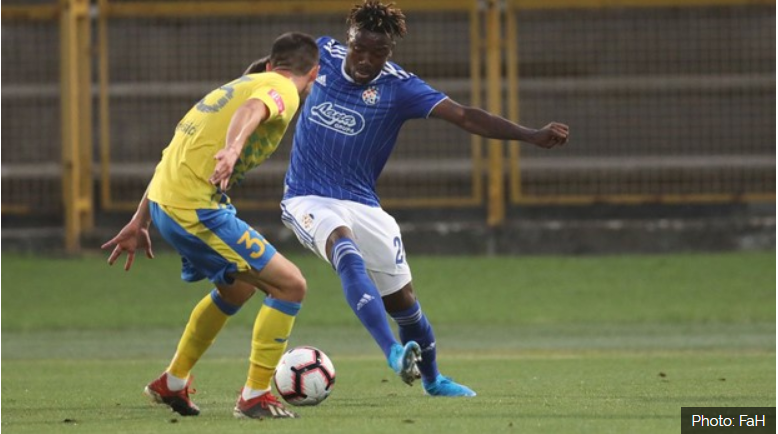 Things are heating up in the Prva Liga with Dinamo and Hajduk vying for the top spot while Rijeka and Osijek linger close by.

Dinamo had an early scare in their match Friday in Zaprešić when they went down 1-0 in the eighth minute, but kept their composure and fought back to earn two goals to seal the victory. Both of Dinamo’s goals came from Nigerian national Iyayi Believe Atienwen. Atienwen was transferred to Dinamo from Gorica where he scored 7 goals in 17 appearances last season. He scored an additional goal last season for Dinamo in nine appearances.

Hajduk Split has been keeping pace with Dinamo, despite an early-season loss last week. This week, the Bili found redemption with a convincing 3-0 victory against Gorica. Two goals from Brazilian Jairo de Macedo da Silva were more than than enough to keep the challenging Gorica at bay but it was the Zagreb-native Josip Juranović who scored the most pleasing goal of the match. Juranović received the ball on his own side of the halfway line and put on an impressive display of individual effort to bring the ball into the box and finish the play himself for the third goal.

Rijeka and Osijek played what may have been the most entertaining and significant match of the weekend. The two sides ended in a 1-1 draw but the season-long battle between the clubs gave the match an added impact in importance.

Rijeka had several late chances to take all three points, but it was Osijek who found the net in the dying minutes thanks to a quick display of passing and cool finish by Michael Jaaper in the 87th minute.

Osijek’s defense was a thorn in the side of Rijeka manager Igor Biščan, but according to Biščan, he is satisfied with the draw, especially after the hectic European schedule that has been added to Rijeka’s season. Rijeka will now focus on their next opponent, Ghent, who they will face in the Europa League playoff round Thursday.

NK Lokomotiva faces NK Varaždin on Saturday and ended in a 1-1 draw. Varaždin has yet to find victory this season while the match ended in Lokomotiva’s first draw of the season.

NK Istra fell to Slaven Belupo on Saturday thanks in part to two goals from Ivan Krstanović. Krstanović’s second goal tied the match at 2 shortly after the restart but David Puclin was there to win the match for the Pharmacists.

The match also marked the end of Mario Cuze’s impressive early-season scoring run. Istra also made an additional signing this week, bringing in former Rijeka and Rapid Vienna player, Ivan Močinić. After leaving Rijeka for Vienna in 2016, his playing time was drastically reduced due to a number of injuries, making only 24 appearances for the first team and later demoted to the second team. Prior to that, he spent his entire career in Rijeka and played a total of 142 official matches in the first team. He also won the Cup in the 2013/14 season.