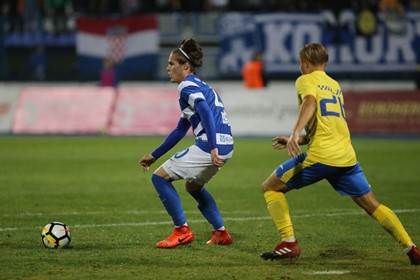 The weekend began with an own goal that led to Cibalia’s 1-0 win on Friday at Aldo Drosina. The win against NK Istra 1961 was the clubs second-consecutive victory, and second-consecutive times beating Istra, who are tied at the bottom with NK Rudeš with two points

But the real fun began with Rijeka’s come-from-behind win over NK Lokomotiva Saturday. Jan Doležal put Lokosi up 1-0 in the first 16 minutes of play and it too nearly the entire match for Filip Bradarić to break down the bus parked in front of the visitor’s net. The 81st minute goal tied the match at one, but opened the doors for a second goal, scored in the 90th minute by Florentine Matei for the Rijeka win.

Dinamo, Hajduk, and Osijek all kept pace with each other, posting clean sheets in their respective matches on Sunday.

Hajduk kicked off the day with a thwarting of NK Rudeš, 4-0. The match was highlighted by a hattrick from Amed Said, scoring in the 12th, 45th, and 59th minutes.

Dinamo Zagreb took care of business at Maksimir, handing Slaven Belupo a 2-0 loss. Ivan Fiolic scored the opening goal from the top of the penalty area in the 20th minute, going near post and beating Mladen Matković with a low hard shot. Amir Rrahmani added insurance in the 66th minute.

And NK Osijek showed no signs of slowing down or letting European play effect their league form. A 3-0 win over Inter Zaprešić seemed almost routine with goals from Andrej Simunec and Muzafer Ejupi. A 90th minute own goal was scored by Inter to round out the score. 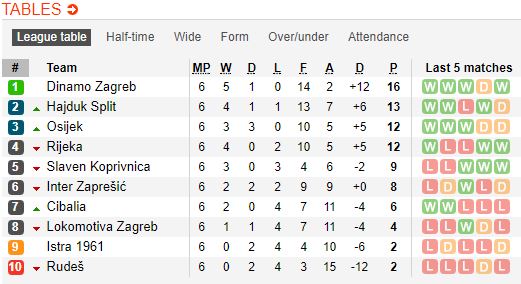