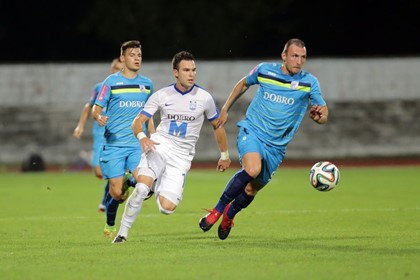 Dinamo Zagreb remain on top of the table after a rough week in European play, but a shocking result for Osijek has found the surging team on a slight downslope in league play.

Three goals from El Arbi Soudani was more than enough for the Modri to take care of NK Lokomotiva. Soudani scored his hattrick in the span of 40 minutes at Kranjčevićeva on Saturday evening, totally his season’s tally to four goals.

Dinamo now have a three-point cushion on Hajduk Split, who remain in second place after the week’s end.

But Hajduk’s ambition hopes they will not remain there long.

Hajduk coach Joan Carrillo stated earlier this week that there is now better time for Hajduk to clinch the title than this season. According to Carrillo, Rijeka will not be able to defend the title while also participating in the Europa League for at least the remainder of 2017. He also stated that there has never been a weaker Dinamo squad and should be easily conquered.

The Bili have been on the right path so far this season, earning five wins, a draw, and a loss, remaining three points back from Dinamo and added to their cause on Sunday, defeating NK Istra 1961 at Poljud. Ante Erceg and Nikola Vlašić made it on the scoreboard in the 2-0 win.

Istra is still looking for their first win of the season, sitting in last place with two points.

Rijeka is struggling to keep pace with the top of the table, finding themselves four points back with two losses already in the early stages of the season. They did however routinely defeat Inter Zaprešić 3-1 away over the weekend, with two goals from Heber and an added tally From Mario Gavranović.

A shocking upset in Vinkovci left Osijek on the losing side of one of Croatia’s best derbies.

Marko Pervan scored his league-leading fifth goal of the season to counter an early goal scored by Antonio Perošević, but Ivan Galić gave Cibalia the ultimate lead to give them their third-consecutive win. They moved up to sixth on the table, just a point shy of fifth place. Osijek have found themselves in fourth place, seven points from the top.

Slaven Belupo and NK Rudeš played to a tight 2-2 draw Saturday. Slaven held the lead going into extra time, but conceded a penalty in the 90th minute, which Tomoslav Havojić turned into his second goal of the game and stole a point away from home for Rudeš. Rudeš is still in search of their first win and sit in ninth place with three points, all from draws.

Video highlights will be posted when made available. 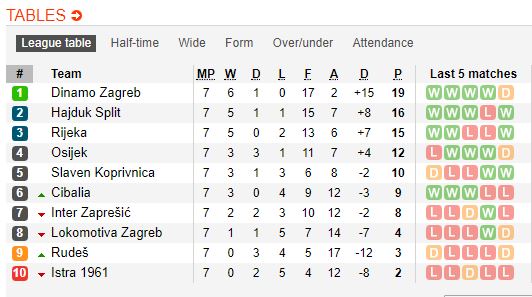