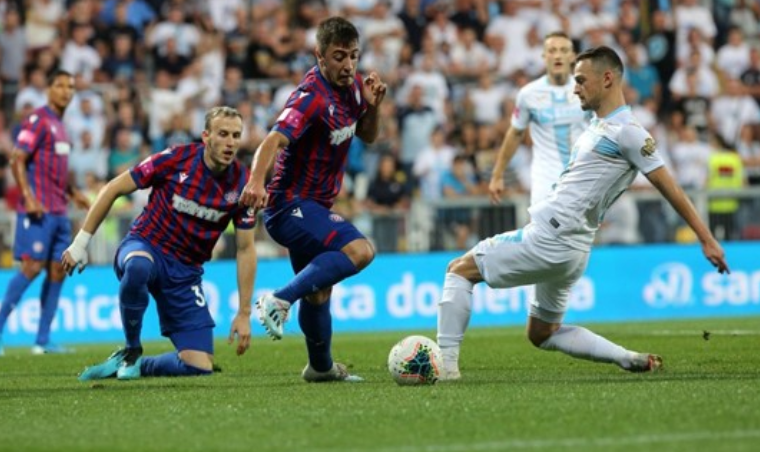 Hajduk remain on top of the table, despite a disappointing 1-1 draw against Rijeka on Sunday.

With a game in hand over Dinamo Zagreb, Hajduk had the opportunity to go three points clear, but instead rest in first place only on goal differential.

Rijeka, too, should be disappointing with splitting the points. NK Osijek remains ahead of Rijeka, but also drew over the weekend, leaving a chance to Rijeka to overtake them in the standings.

This week’s marquee match up took place on Sunday at Rujevica. Rijeka welcomed Hajduk in the season’s first installment of the Adriatic Derby.

Rijeka’s prodigal son, Franko Andrijašević put a stamp on his comeback, scoring on his debut for Rijeka and against his former club. Andrijašević’s goal came in the 3oth minute off the end of a sensational early cross sent in by Luka Capan. Andrijašević finished the play with a banging header well out of reach of goalkeeper Josip Posevac.

Rijeka gave Hajduk several more scares throughout the match by striking the post rather than the net, but Hajduk appeared unphased and were able to tie the match in the 78th minute.

Tonio Teklić slotted on in from distance to tie the match. The left-footed strike seemed to weave between the Rijeka defense and squeezed through the post and the hand of a diving Andrej Prškalo, who himself seemed rather surprised the ball made it through the web of feet between him and the striker.

The draw leaves Hajduk in first place, but are tied on points with Dinamo.

Dinamo Zagreb defeated Istra in a seemingly routine 1-0 win over the weekend, but the match showed Dinamo has work to do if they want to compete with Europe’s best int he Champions League.

Goal-scoring sensation and Dinamo loanee, Mario Čuže, made a crucial mistake, which lead to Dinamo’s goal.

The young player for Istra must have forgotten that he is not currently playing for his parent club when he passed the ball directly into the path of Amir Gojak who deflected the errant pass to Mario Gavranović who took the ball down field to score. Istra teammate, Markus Pavić said everyone needed to forgive Čuže as he’s the league’s top scorer and will redeem himself next week against Rijeka.

NK Osijek was staring in the eyes of victory until NK Varaždin worked a miracle into the match to secure a 2-2 draw in Osijek.

Osijek held a 2-0 lead over the winless Varaždin until the 89th minute when Neven Đurasek scored what seemed to be a consolation goal from a brilliant free kick. That consolation goal turned out to pave the way for a second goal on seconds later scored by Vitali Lisakovich. The shock ending left the teams splitting the points.

The crowd let their voices be heard after the match, demanding the resignation of coach Dino Skender. Osijek will face Lokomotiva next week.

NK Lokomotiva and HNK Gorica finished their match in a scoreless draw. Former Dinamo Zagreb player and Croatian international, Sammir, made his debut for the Lokosi, coming on as a 66th minute substitute.

Inter Zaprešić recorded their first win of the season. The club welcomed Slaven Belupo to Zaprešić on Saturday and handed them a 3-1 beating thanks to two goals in the final three minutes of the match. 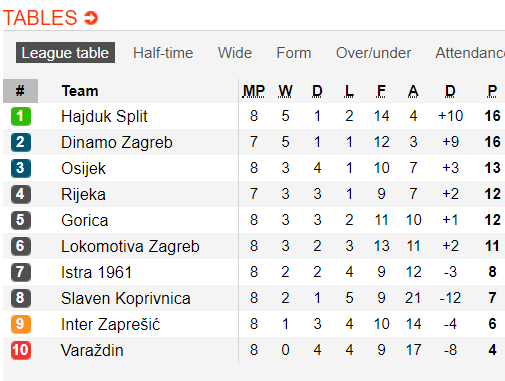