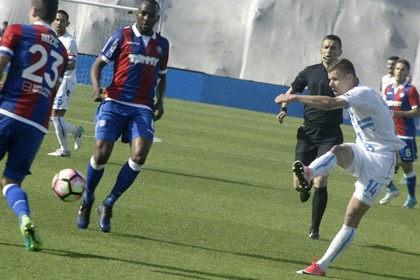 Rijeka suffered their first loss of the season at the hands of NK Lokomotiva on Saturday, May 6 at Kranjceviceva. The 1-0 loss was also the first tie Rijeka was held scoreless since November 2016 against Slaven Belupo.

This was the first loss suffered by Rijeka since Slaven Belupo defeated them 3-0 on April 4, 2016.

Rijeka bounced right back this past weekend during the one of the league’s biggest derbies against Hajduk Split, where Rijeka maintained a five-point lead over Dinamo with a 2-0 win over Hajduk.

Goals from Mate Males and Mario Gavranovic were more than enough to secure three points from Hajduk.

Dinamo Zagreb is doing their best to keep pace with the league leaders. Dinamo secured wins against Inter Zapresic last weekend as well as three more points against RNK Split, beating the struggling sided 1-0 in Split. Dinamo remain five points back from the top with three matches left to play.

Hajduk Split and NK Osijek are embattled in a title fight for third place. The two sides are currently tied on points and have been flip-flopping positions with each other all season.

Hajduk recently handed Osijek a 5-1 loss last weekend at Poljud, but the Bili cancelled out that win with a loss this past weekend while Osijek earned three points against Slaven to re-join Hajduk at third place.
Hajduk currently takes third place on goal differential.

By the grace of God, HNK Cibalia recorded their fourth win of the season. The former bottom-dwellers defeated NK Istra 1961 on their own turf in Pula to finally exit the drop zone. Cibalia now sit ABOVE RNK Split with 19 points in the relegation playoff spot. 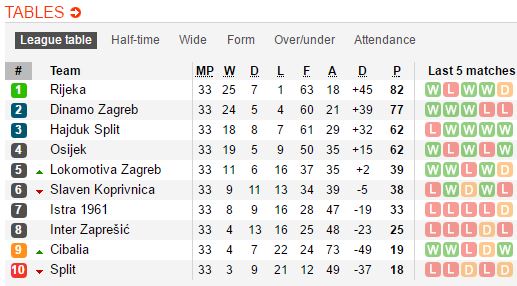