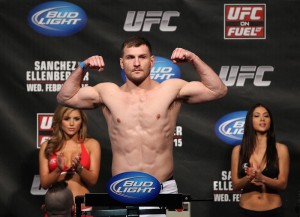 American Born -Croatian Stipe Miocic will step into the Octagon for the second time tonight and put his undefeated record on the line. His opponent, Phil De Fries is also Undefeated and one of the combatants will add a loss to there record for the first time tonight.

I spoke with Stipe via text last night and he was in good spirits. Stipe seems focused and ready to go to war with De Fries.

My prediction is De Fries attempts the take-down early on, but Stipe uses his superior wrestling to stop the take-down. De Fries will be forced to stand and strike with Miocic. The British Heavyweight will get picked apart on the feet which will result in Stipe Miocic getting the KO late in the first round.

Now I ask the readers of Croatiansports.com to post their predictions on the fight tonight.

Lets go Stipe get the knock out of the night bonus.