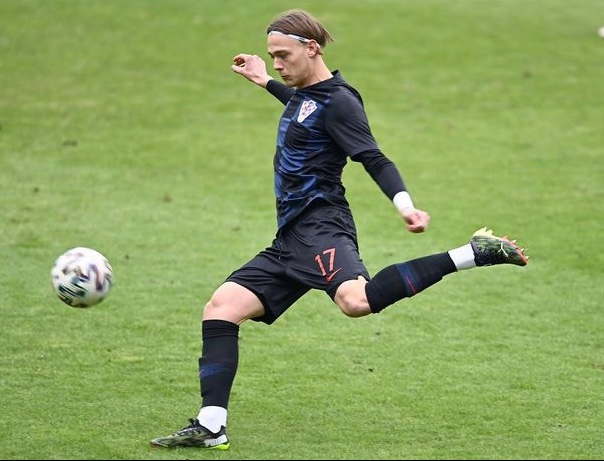 In recent years, the Vatreni have struggled to find a true skilled player to put the flank – Brekalo and Oršić both have the potential – but let’s face it, they’ll never be world class. Ivan Šaranić, a 17 year-old winger and attacking midfielder from Dinamo Zagreb might just be the cure to the problem.

With an extremely impressive resumé of 80 goals in 85 appearances for the Dinamo Zagreb youth squads, Šaranić has already caught the eyes of Juventus, Barcelona, Inter Milan, and Real Madrid, respectively. Recently, Barcelona sent Dinamo Zagreb an offer for Šaranić that was vetoed by Zdravko Mamić, who asked for much more than Barcelona initially offered – proving that Dinamo do not want to let go of the youngster so easily. Šaranić is just getting started, as he recently made his debut for the Modri in a cup victory over Rudeš. He also scored his first professional goal last weekend for Dinamo Zagreb II in a crucial Druga Liga match. Šaranić is about as close to a complete player as it gets: he possesses magnificent pace, superb dribbling skills, outstanding long range shots, and already has a mature demeanor. The 17 year-old is well known for his terrific consistency and for scoring magnificent goals from outside the box nearly every match.

After speaking with Šaranić and his agent Matej Škegro, from MSports PRO, we learned that Ivan Šaranić enjoys comparing his style of play to Juventus’ rising star, Dejan Kulusevski. When asked about his opinion on being dubbed “the Croatian Kevin De Bruyne”, Ivan replied, “I really like that they compare me with De Bruyne, but I play a little closer to goal.” Ivan considers Luka Modrić to be his idol, and also says that Dinamo Zagreb’s captain Arijan Ademi has taken the youngster under his wing and assured him that he can always count on him, a gesture that has stuck with Šaranić.

Šaranić has a list of accomplishments to his name at such a young age. The attacker has four youth league trophies in his cabinet – at the U14-17 levels – and was within the league’s top three scorers every season – while playing as an attacking midfielder. Ivan has scored eight goals in 31 appearances for Croatian youth teams (U15-19), most recently featuring for the U19 squad under Joe Šimunić. When asked about his emotions following his debut with the Dinamo Zagreb senior squad in a 2-0 victory over Rudeš, Ivan told us, “This was a dream come true for every Dinamo academy player, I felt proud and happy that I made my debut.” Playing for a Europa League quarterfinalist’s senior squad at the age of 17 is a big accomplishment, and a huge stepping stone in the young player’s career.

Ivan is arguably the most technically gifted Croatian football talent (alongside Luka Sučić) Croatia has seen since Alen Halilović – but this time, Dinamo Zagreb has been crucial in helping the player develop before sending him to a gigantic European squad. Ivan Šaranić adds to the terrific list of young attackers that Croatia is producing at the moment, and has the potential to be a pivotal player for the Vatreni senior side sooner than later.

@POlafur @iletdadogsout @lfcredynwa @Dejan06Lovren I gave you the video, where his arm moved straight up and you give me a picture. 😘😂

"We have to win to pass the group stage so we have to change a certain chip in our head. We have to play much, much better, all of us."