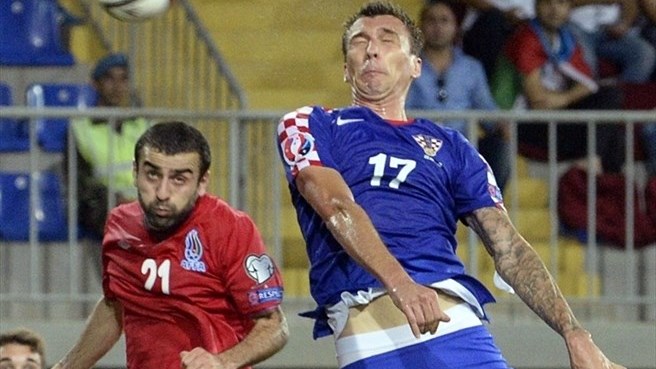 The idea of coasting through an easy win during yesterday’s game seemed highly unlikely. With the inclusion of Croatian legend Robert Prosinecki as manager, Azerbaijan has looked more cohesive. The positive results from beating Malta at home and drawing Norway in Oslo were encouraging. They haven’t conceded a goal in 180 minutes under Prosinecki’s tenure. Should these statistics have applied to a star-studded Croatian team that has scored 16 goals through six qualifiers?

Instead of repeating the same jargon about several first-team players playing for high-profile teams, it would be wise to ignore that quote. Many pundits will find it difficult to look past a midfield that features three players on two of the biggest clubs in the world. As proven today, you will need more firepower to break down unified defenses. In today’s modern game, utilizing a narrow bunker defense and countering on the break with pacey midfielders has become the norm for lesser-talented teams. Look no further than Slaven Bilic’s brilliance in West Ham’s upset win over Liverpool last weekend.

Nobody quite knows the true essence of how to break down a bunker defense. A mere one goal is usually the viable response for that question. When Croatia managed to create actual chances, it came mainly from the wings. Sime Vrsaljko made an excellent run that led to a near goal. It was a solo effort that we haven’t seen Darijo Srna manage to accomplish throughout his career. While Vrsajlko looked nervous early on, his defensive capabilities will make him a suitable long-term replacement for Srna.

Ivan Perisic created two goal-scoring opportunities with a right-footed cross and a one-two combination with Nikola Kalinic. Both plays presented Mario Mandzukic with golden chances. Somehow both strikes (one header, one right footed toe poke) landed straight in the goalkeeper’s hands. What happened to the player that scored 33 goals in 54 games for Bayern Munich? It has become well documented that Mandzukic needs service to be effective. That is the case for any prototypical target man.

Earlier in the qualifying campaign, Mandzukic was subdued and received little service. The Juventus striker was still working relentlessly by harassing defenders and tried to get involved on a consistent basis. Things eventually opened up against Norway, yet he still couldn’t get on the score sheet. Mandzukic wasted a one-on-one opportunity that raised some eyebrows. The raised eyebrows transitioned into irate head shaking from missing and causing a penalty against Italy in June.

Mandzukic has always lacked the quality of a true world-class forward. The possibility of him reminiscing a world-class striker such as Robin Van Persie (in his prime) or Karim Benzema was never going to occur. On the ball, the lanky striker is limited outside the box. His predatory skills inside the box, along with his strength and work ethic have propelled him towards playing for three top-tier clubs.

Those predatory skills seem to be diminishing after wasting numerous goal-scoring chances. No Croatian striker has played so deplorable, since Ivica Olic against Turkey in the Euro 2008 quarterfinals. Credit to Olic for constantly running, refusing to make pouty faces, and not attempting any ridiculous back heels in front of goal. Atletico Madrid wasn’t hesitant in selling Mandzukic, as Diego Simeone grew fed up of his antics and lack of production. Niko Kovac may want to follow a similar strict approach rather than coddle him.

With the exception of scoring against Italy in June, Mandzukic hasn’t scored in a competitive club or international game since February 21st against Almeria. That drought is very concerning for a striker, who was “scoring for fun” two years ago. Croatian’s main goal scorer has always excelled in big games against the likes of Italy, Ireland, Iceland, and Serbia over the past three years. While his resume in big games is impressive, a spot on the bench may be necessary for Sunday. The sight of a ragged striker desperately needing to score isn’t a good recipe for a team under pressure.

Mandzukic isn’t the only significant problem. Kovac’s inability to diversify his tactics were concerning. The former captain should have known that Prosinecki was going to be well organized, given the obvious familiarity. Different tactics from utilizing the wings more to having his midfielders shoot outside the box could have been more beneficial. Azerbaijan’s defense was compact through the majority of the game. A stronger focus on stretching them out through utilizing the wingbacks would have likely presented more chances. Kovac didn’t do himself any favors by replacing his most dynamic midfielder (Luka Modric) for a box-to-box midfielder that has continuously underwhelmed for the national team (Marcelo Brozovic).

Milan Badelj and Marko Pjaca were encouraging surprise inclusions, when the starting lineups were announced. Kovac doesn’t deserve fault for those personnel decisions, although should have subbed out Pjaca by the 75th minute. Both players failed to flourish from making their respective rare starts. Badelj’s inability to pass and form an organized partnership with Modric was most alarming. After a successful first season with Fiorentina, the defensive midfielder underwhelmed once again for the national team. Badelj hasn’t lived up to expectations on the national level, as former manager Igor Stimac publicly criticized him following Croatia’s comeback win over Wales in 2013.

The inability to develop another winger has hindered Croatia’s attack. Olic simply isn’t capable of playing within the first-team at a high level anymore. Andrej Kramaric isn’t an ideal fit on the wing and isn’t playing for Leicester City at the moment. Ante Rebic has the same issue at club level, along with having a tendency of dribbling into a crowd far too often. Both players have shown promise, but can’t be trusted yet. Alen Halilovic is the ultimate wild card, who could possibly play a super-sub role for his pace and trickery. It would be too physically demanding for the tiny inexperienced winger to start against major opposition.

Many questions linger about the landscape of Croatia. The prevalent issue at left back hasn’t even been mentioned yet. While many fans worry about the starting eleven in June, the focus should be on Sunday. Following yesterday’s dismal performance, Croatia only holds a one-point lead over Norway going into Sunday. They were slightly fortunate to win 5-1 last March based on a few excellent solo efforts from Brozovic and Perisic. Norway also conceded two weak goals in the final five minutes.

Despite being unbeaten through seven qualifiers, the pressure is on for Kovac. The away performances against Bulgaria and Azerbaijan have been lackluster. Croatia has notoriously struggled away from home over the past few qualification periods. That needs to change on Sunday by not playing so narrow and predictable. While trusting Danijel Pranjic to play more of an attacking role is hazardous, it’s one of the few ways to break down lesser-talented teams. Modric and Rakitic aren’t going to take defenders off the dribble.

If they aren’t going to shoot from distance, direct and fluid ball movement will secure Croatia’s trip to France next summer. Many fans have complained about the lack of a big game atmosphere for these particular qualifiers. Your wish has now been granted. Kovac will be tested once again within a big game atmosphere. Even though a draw would likely secure qualification, a win would significantly improve morale. This current team can’t possibly go 180 minutes without scoring against two sides that haven’t qualified for a major tournament since the 1998 World Cup (Norway). Whether Mandzukic rediscovers his scoring form or a highly touted prospect shines, answers need to be answered for Croatia’s lethargic attack.