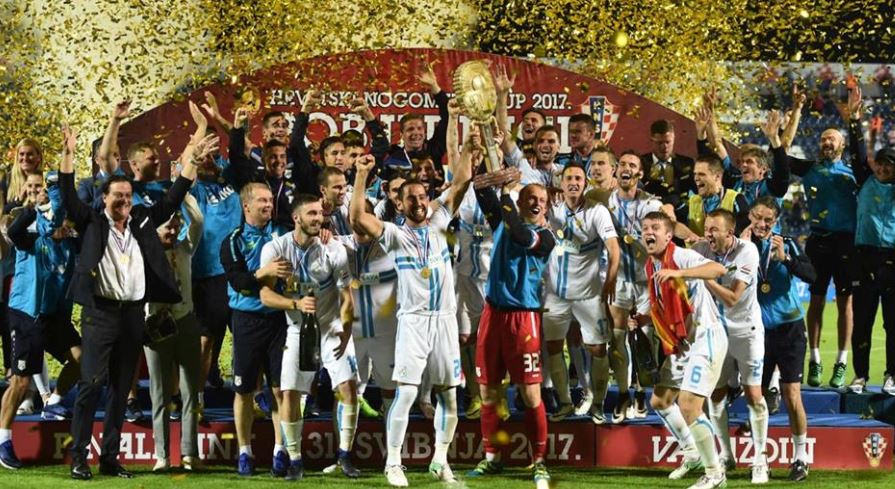 The Croatian footballing world has been turned upside down.

Not only has Dinamo Zagreb been bested in the HNL, giving up the championship for the first time in 12 years, they also gave way for the new champions, Rijeka, to win the Croatian double on Wednesday by relinquishing the Croatian Cup to them as well.

Rijeka have been crowned kings of Croatia twice this month, winning their first league title as well as their fourth Cup. The club has its eyes set on the Champions League now, while Dinamo will have to settle for Europa.

Statues will be erected in the likeness of coach Matjaz Kek, murals will be painted depicting the likes of Mario Gavranović, who scored two goals in the Cup final, as well as Franko Andrijašević, who scored a team-leading 16 goals in their championship campaign. Expect an influx of children born in Rijeka to bear the names Franko, Roman, and Mario in the coming nine months.

Dani Olmo was able to put Dinamo back level with Rijeka in the 37th minute, but that only split the time between Gavranović’s two goals. Rijeka was back on top in in the first minute of the second half.

Dario Župarić tacked on insurance in the 72nd minute to make history in Varaždin, securing the first-ever double for Rijeka.

The final European spot is given to the winner of the Cup. Since Rijeka is already slated to enter the Champions League qualifiers, and both Dinamo and third-placed Hajduk to Europa League qualifiers, that leaves fourth-place Osijek to take the honors of entering the early stages of the Europa League qualifiers. No other team may be as deserving of the consolation reward than Osijek, who not only held the first-place sport several weeks in the season, but defeated Dinamo and Hajduk this season, only losing out on third place by three points.

All spots are set but one.

HNK Cibalia will look to defend their first division status against Druga Liga runners up, HNK Gorica. The first leg of the relegation playoff kicks off at 2 pm EST on Sunday, June 4, with the return leg in Vinkovci at 2 pm Wednesday, June 6.