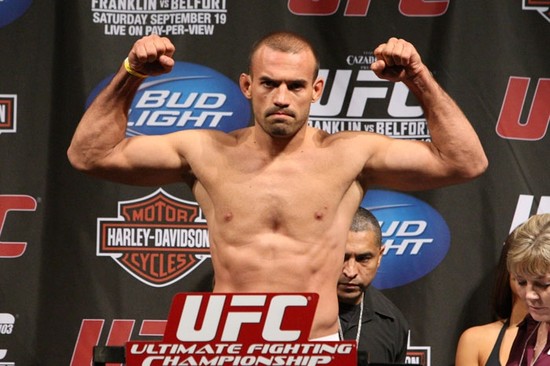 This Saturday night “The Duke” Igor Pokrajac will look to make it four in a row when he faces Brazilian Jiu Jitsu stand-out Vinny Magalhaes at UFC 152. Pokrajac’s last three wins have been over Todd Brown, Krzysztof Soszynski and Fabio Maldonado respectively. Igor should look to keep the fight standing Saturday night and get the quick KO victory.

Magalhaes on the other hand is on a five fight win streak in the M1 MMA organization. Vinny Magalhaes versus Igor Pokrajac Saturday night will be Vinny’s first bout back in the UFC since a decision loss to Elliot Marshall back at UFC 97.

The biggest question mark going into the bout is will Magalhaes get the big show jitters as he has not performed on the big stage since 2009. The last time Igor fought in Toronto he ended the fight in spectacular fashion getting the KO victory in 37 seconds. Let’s hope we get some of the same from Pokrajac Saturday night. If Pokrajac can get another victory Saturday night the UFC can no longer ignore him and will have to give him a top ten contender next.

Tune in Saturday night and cheer our Croatian Light Heavyweight Igor “The Duke” Pokrajac on. The fight will broadcast live on Payperview at 10pm eastern time from the Air Canada Centre in Toronto, Ontario, Canada.

The videos below are a special that was done with Igor Pokrajac in Hrvatska prior to his bout Saturday night at UFC 152 enjoy!!!!