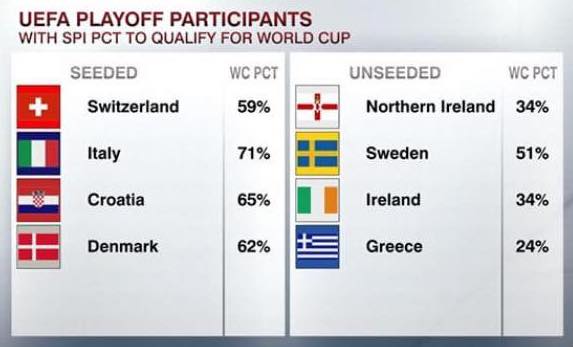 After beating Ukraine in Kiev yesterday, Croatia are two games away from qualifying for the World Cup in Russia. While many thought we should have finished 1st in our group, this is no new territory for the Vatreni.

Other Times Croatia Were In a WC Playoff?

The Golden Generation didn’t qualify first in their group. They had to beat Ukraine 3-1 on aggregate to advance to France.

Before we got to Brazil, we had to beat Iceland 2-0 (aggregate) to advance. Unfortunately, we all know what happened there.

How The Playoff System Works

WHO ADVANCES TO THE PLAYOFF?

Eight of the nine teams who finished second in their group qualify for a two-legged playoff. The second place team with the lowest points out of all the groups is the one that will be missing out.

How are they matched up?

Eight teams will be drawn into two columns. The 4 teams with the highest FIFA rankings will be “seeded”, while the bottom four pray to God they don’t get matched up against the team with the highest ranking. A seeded will play an unseeded over two legs. Best aggregate score goes to the World Cup. Away goal rule will be in play.

When is the Draw?

When do the games start?

Since each team will have to play a HOME and AWAY game, you will get to see two games. The first leg starts on November 9th (Thursday) and November 11th (Saturday).

* If you aren’t watching Saturday’s game at your nearest Croatian Dom, you should probably rethink your life.

What happens if we win?