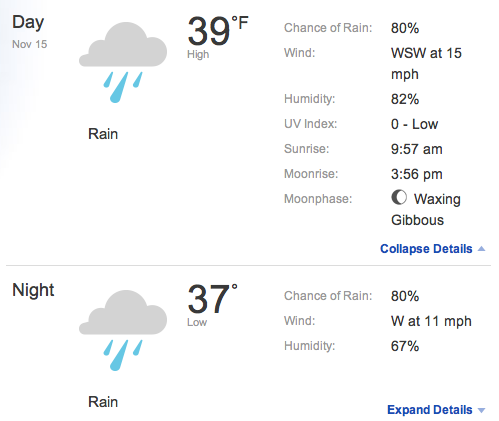 One major concern for the Croatia-Iceland match in Reykjavik this Friday has been the weather. Iceland, which is just outside the Arctic circle, has never hosted a match this late in the year. The 15, 427 Laugardalsvöllur Stadium is not equipped with heating below the playing surface and only has a roof to cover part of the stands. Although the match could have been a disaster, mimicking the United States’ game against Costa Rica in the snow earlier in the year, conditions for the 2PM (ET) kickoff look promising.

A light snow will fall Wednesday and Thursday, however, a low of only 37 degrees Fahrenheit is expected Friday night. But with this also comes a good chance of rain in windy conditions. Severe weather could only aid the home side where goals could be hard to find. It would be a disaster if Iceland drew 0-0 at home, possibly only needing one goal at Maksimir four days later to clinch a spot at the World Cup.

Hopefully the weather remains manageable so we can watch some entertaining football and not a circus with rain, sleet and wind being the determining factor.

That is your CroatianSports.com weather report for the day…