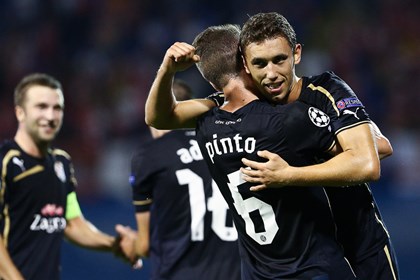 The most famous 90 minutes in recent Dinamo Zagreb history are up. The Modri came out victorious against one of the Premier League’s greatest with a score of 2-1 in their opening Champions League match.

Arsenal controlled the match in the first 15 minutes, but it was Dinamo who scored first with Josip Pivarić netting a goal in the 24th minute.

Pivarić received a pinpoint pass after a fantastic run and put the ball on net. Arsenal goalkeeper David Ospena made the save, but the rebound ricocheted off the knee of Alex Oxlade-Chamberlain and into the goal.

The goal was awarded to Pivarić, but some sources credit Oxlade-Chamberlain the goal.

The day only got better for Dinamo after Olivier Giroud was sent off for his second yellow card of the game just before the half’s end.

Dinamo’s confidence was at an all time high and they continued to play the match with nothing but victory on their minds.

Junior Fernades shocked the footballing world after he doubled the Dinamo lead in the 58th minute.

Fernandes was uncontested when going up for a header during a corner kick. The Chilean met the ball and scored for his team to extend the lead 2-0.

Dinamo had several more chances to score again, but faltered on them, most notably when El Abri Hillel Soudani hit the post with his attempt and failed to score on the rebound.

Ante Čorić had his chance to score when Ospina misplayed a ball at the top of the box, but Čorić was unable to capitalize on the mistake and was injured during the play by Ospina.

Arsenal broke out all the guns for the final minutes of the match to try and salvage a point.

Theo Walcott was able to score what was essentially a consolation goal for the Gunners, but Dinamo were able to bare the most tense final minutes of the match.

Three points were awarded to the Modri with the victory and they share first place in the group with Germany’s Bayern Munich.

“The game was ruled by the judge. The first goal was scored offsides,” Wenger claims. “Sending off Giroud was too harsh.”

Dinamo coach Zoran Mamić has pleased with not only his team, but also with the fans who attended the match at Maksimir.

“I am happy and proud and thank the team that gave one hundred percent what we agreed on,” Mamić said. “Thanks to the audience that cheered us on when Arsenal pressured.”

Congratulations to Dinamo from all of us at CroatianSports.com.

Dinamo will next face Bayern Munich next week in Germany.