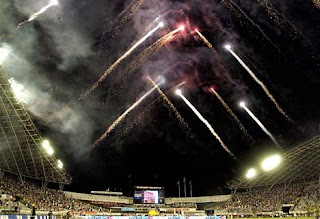 Slobodna Dalmacija is reporting that many Croatians in Dalmacija, especially Split, want Croatian qualifiers played at the Poljud now that the undefeated competitive streak has been broken at Maksimir in Zagreb. This is really the only opportunity that Split has to lure Croatian FA representatives into making a switch of home grounds for the team- even if it’s only a few matches to start off with.

The saying goes, “If it isn’t broken, then don’t fix it.” Now that the ‘Croatian Wembley’ (Maksimir) has been infiltrated; and the streak broken, I think a change would be good for the Croatian FA, as well as the entire country. Anyone would be called crazy and checked into a mental institution if they dared to recommend a change from Maksimir in the past few years. But Croatian football is now starting off with a clean slate with their next home game against a pretty bad Andorra side in Zagreb on October 15th.

So why might the Croatian FA and fans alike not want games played in Split?- well maybe because Croatia has never won a game at the Poljud, ever! Croatia has 3 losses and 3 draws at the Poljud in six friendly matches. And in the only three qualification games Split has ever hosted (the last one was played in April of 1997 against Slovenia in a World Cup 1998 qualifier), Croatia has posted 3 draws.

So if it was up to you, would you move any qualifiers to Split? I mean the city is the central hub of the Croatian coastline and hasn’t hosted a ‘real’ Croatian international in over 11 years. I think it’s time. And I also think the fans in Split would even be better; as long as they behaved themselves- not to take anything away from fans in Zagreb as they are always great.