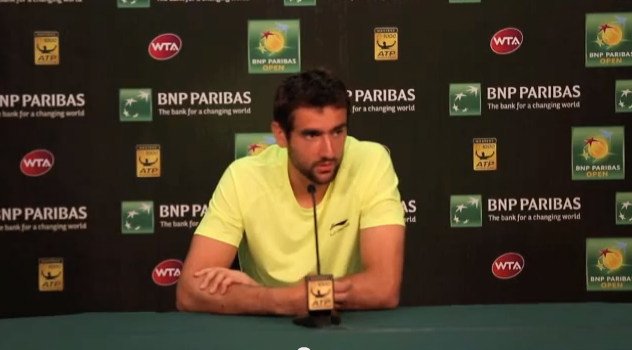 CroatianSports.com spoke to 2014 U.S. Open champion Marin Čilić Saturday after his 2nd Round 4-6, 4-6 straight set loss to Argentinian Juan Monaco at the BNP Paribas Open. It was Čilić’s first major match in 2015 after missing the Australian Open due to a right shoulder injury.

When asked “why are you (Čilić) playing when you are not yet 100%?”, the Croatian #1 stated that he is in fact back to full strength.

This was clearly not the case versus Monaco, and despite playing in 95 degree (F) conditions just after noon, Čilić seemed unfocused with a lack of energy as he hit balls well long and sent numerous balls unintentionally in every-which direction on the court.

Čilić was supposed to play doubles in this tournament as well, with Argentine Juan Martin del Potro, but the two withdrew.

Čilić is nowhere near his 2014 U.S. Open form. From the looks of it, expect him to miss some time to recoup before the Wimbledon grass court season begins. If not, at this pace, he won’t be making it very far in these ATP tour events.