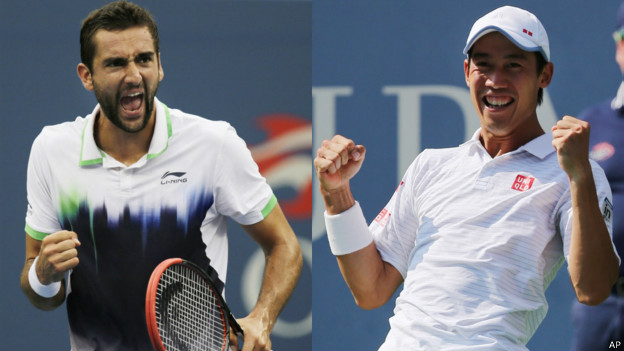 In the most surprising Grand Slam final of the past decade, #14 ranked Croatian Marin Čilić will take on Japan’s Kei Nishikori in New York City for the right to lift their first major title at the U.S. Open Monday night. The match will begin approximately at 5pm (ET).

Čilić has been on an absolute tear during the U.S. Open this year; only dropping a total of three sets in the six matches he has played. What’s even more impressive was his ability to defeat both Tomas Berdych and Roger Federer in straight sets. Čilić has not been on the court long this tournament and the aces have been falling. He will be much fresher than his counterpart, Kei Nishikori, who has played 14 sets in his past three matches.

Čilić is one match away from his first ever Grand Slam title. He would become the third Croatian to ever capture one and only the second male. Iva Majoli won the 1997 French Open while Goran Ivanišević, Čilić’s current coach, took the 2001 Wimbledon title in legendary fashion as a wild card.

Will Čilić add his name to the list Monday?