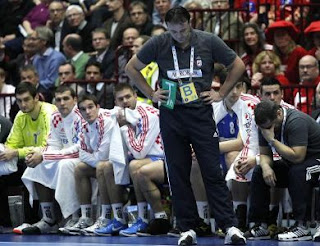 After playing one of their best halves of the year Thursday against Denmark, the Croatian Cowboys squandered their one-goal halftime lead in the second half to lose 34:29 to the Danish ‘Red and White Dynamite’. Croatia now have their backs against the wall as they must win their next three games in order to qualify for the semifinals. They will face Argentina, Poland and hosts Sweden in the Main Round. All three of these teams already have a one-point advantage on Croatia from preliminary play. As points are carried over from the previous round, Croatia will not play Serbia or Denmark in this stage. The top two teams from this group will earn a semifinal berth.

CROATIA HAVE WORK TO DO TO MAKE THE SEMIS

Pros: Croatia is coming off an incredibly tough match against world power Denmark, in what was basically a home match for the Danish, as Sweden is a short ferry ride from Denmark. Listen to the crowd in the video below. The arena was 90% Danes, who were all on the same page during the final minutes. It should only make things easier for Croatia in the next round.

Cons: Croatia cannot slip-up in their games against Argentina, Poland and Sweden. They must win all these matches or this tournament would be considered a failure. Let’s see what the Cowboys can do as they play Argentina on Saturday.