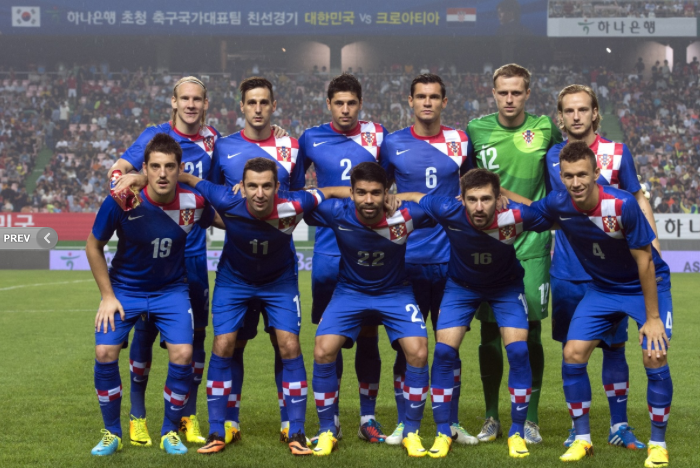 It was a quiet and scoreless first half in South Korea Tuesday night as Croatia travelled halfway across the globe for this friendly. They would be without stars Luka Modric, Mario Mandzukic and Vedran Corluka for this match, although captain Darijo Srna, Ivan Rakitic and Eduardo made the start. The Vatreni had two good looks on goal in the first half with Eduardo placing a nice ball to Nikola Kalinic just outside the box, but the Dnipro striker would bend the ball too high, sailing it just over the crossbar. He should have done better. LAte in the half, Ivan Perisic made a nice run down the right line and manged to get the ball to an open Ivan Rakitic, who rifled a one-timer right at the Korean goalie.

Croatian goalie Dario Kresic was very aggressive in the first half, coming out of the six-yard box to collect balls in the air and punching away Korea’s best chance. We very well may be looking at Stipe Pletikosa’s successor. From today’s first half, there’s no reason he shouldn’t be the next Croatia #1.

Korea opened up the second half with an open header off a corner kick. It should have gone in with better placement, but just like the Serbia match, Croatia is allowing the opposition open looks right in front of the net. Ivan Perisic botched a 3v3 counterattack minutes later which should have been the game’s opening goal. But a goal finally came in the 65th minute for Croatia when Ivan Rakitic whipped in a free kick from dead center to have the ball headed into the center of the goal box by newly capped Croatian substitute Leon Benko. The ball was crisply hit down into the ground and Domagoj Vida headed home. It was Benko’s first assist for Croatia and Vida’s first goal.

Minutes later Croatia would add a second goal as Perisic and substitute Pivaric would play a beautiful 1-2 on the left sideline with Pivaric sending a cross into the box with Nikola Kalinic cooly heading home. Kalinic was then subbed out for Dinamo Zagreb whiz kid Alen Halilovic seconds after. The only thing this new look Croatia team had trouble with was Korea’s long balls. Korea nearly had 4-5 chances just playing long balls down the field as they were rarely flagged for offside. It finally worked with 30 seconds to go in the game as Igor Stimac subbed off goalie Dario Kresic for Istra’s Antonio Jezina. On the last kick off the game and within a minute of being subbed in, Jezina got scored on off a header from the middle of the box in his debut match for Croatia. It wasn’t his fault just a shame he couldn’t keep the shutout for Croatia in a reward substitution for traveling with the team all the way to South Korea. 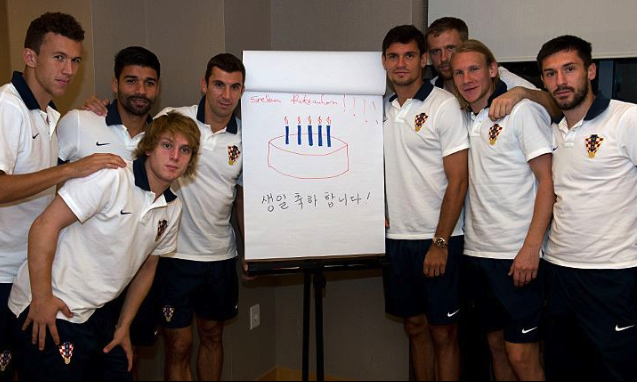 If you were wondering if the HNS had money for a top tier coach after the Stimac shenanigans this past week, think again. The team is in South Korea for a friendly Tuesday (7AM ET kickoff) without star players Luka Modric, Mario Mandzukic and Vedran Corluka. But to celebrate Luka’s birthday (28) on Monday September 9th, the team drew a picture of a cake (that a kindergartener would mock) and threw it up on the team’s website.

No cake and candles for your best player? They should have just asked the well-travelled team of CroatianSports.com for some help. There’s a great little bakery in the Daesin-dong neighborhood near Yonsei University in Downtown Seoul called La Bonne Tarte.