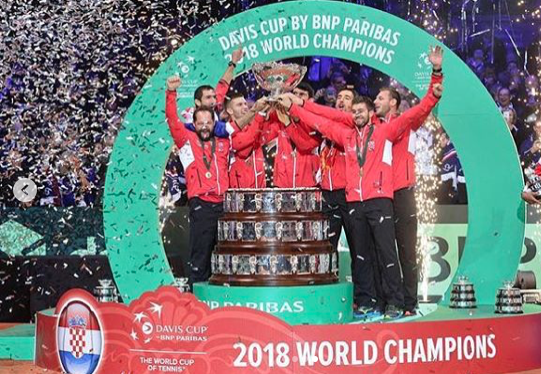 Marin Čilić handled Lucas Pouille in straight sets Sunday to avenge his 2016 Davis Cup disappointment to beat France and hand Croatia their second ever Davis Cup championship. It was a fantastic result to cap a year that will be forever engraved in Croatian sports hearts.

France didn’t tuck their tails between their legs and let Croatia skunk them on home soil Saturday during doubles action. The French doubles team of Pierre-Hugues Herbert and Nicolas Mahut handled Ivan Dodig and Mate Pavić in four sets: winning 6-4, 6-4, 3-6, 7-6. That will keep the French hopes alive going into the final day of action Sunday where singles play resumes.

World #12 Borna Ćorić made quick work of Frenchman Jeremy Chardy Friday afternoon in Lille in the opening match of the 2018 Davis Cup Final. Ćorić won 6-2, 7-5, 6-4 to give Croatia a 1-0 lead over France going into Marin Čilić’s match against Jo-Wilfried Tsonga.

Marin Čilić did more of the same against Jo-Wilfried Tsonga – also winning in straight sets – 6-3, 7-5, 6-4. Croatia now have a stranglehold on the French heading into their doubles match on Saturday in Day 2. One more win and Croatia will lock up their second Davis Cup title.

After a succussful Davis Cup campaign where Croatia have steamrolled past Canada, Kazakhstan and the United States – all on home turf – Team Croatia will take the show on the road this weekend for the Davis Cup Final against who else, but reigning champions France.

Marin Čilić, Borna Ćorić and company will be seeking Croatia’s second ever Davis Cup championship after throwing it away in Zagreb two years ago against Argentina.

Day 1 on Friday will consist of two singles matches in the best-of-five series.

Borna Ćorić will open up the final against Frenchman Jeremy Chardy at 8AM (ET) with Marin Čilić vs. Jo-Wilfried Tsonga following them. A split in Day 1 should be considered a success but Čilić and Ćorić could easily win both of these matches to put Team Croatia in control for the rest of the tie in Lille, France this weekend.