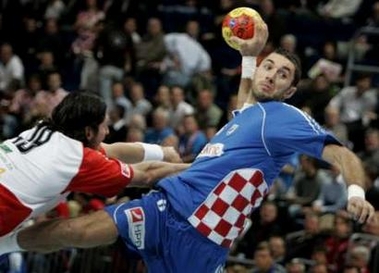 If you haven’t been following the 2009 World Men’s Handball Championship, let me catch you up quickly.

Croatia is hosting the 21st edition of the tournament in 7 cities: Split, Zadar, Zagreb, Osijek, Varaždin, Pula and Poreč. Millions of dollars were invested into building brand-new stadiums for the event and it has been nothing short of spectacular thus far.

Croatia, who is the only undefeated team in the tournament, will face off against France (who they have already defeated) on Sunday, February 1st in Zagreb. The final starts at 15:30 (local time).

The Cowboys (Croatia’s nickname in handball) will try to match their best result in 2003 when they were crowned World Champions in Portugal. They have also won gold in the 1996 and 2004 summer Olympics.

Can Croatia finish the tournament with an undefeated clean sheet and be crown World Champions on home soil? Tomorrow, we find out.

Here’s some highlights from the Sweden game. Do all games end with a complimentary concert?