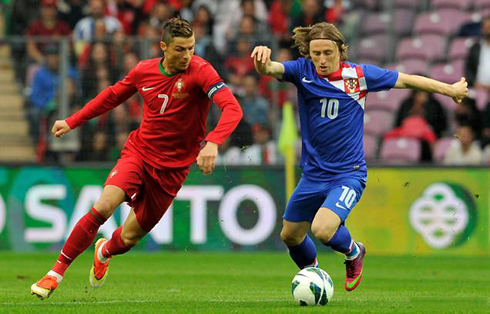 After a magnificent performance on Tuesday, Croatian fans’ hopes are sky high. Along with the fans, it looks like every major media outlet in Europe has labeled Croatia as a favorite to make it to the final. From dark horse, to possible expulsion, to the top team in the tournament, this has been one hell of a ride in such a small amount of time.

That rollercoaster of emotions and historical significance of this match is what makes me weary. As a long time supporter, I’ve seen this story go wrong too many times. We have a team with talent, passion, and willingness, but do we have the mental strength to carry us through to the next round.

I’ve heard a lot of fans mark this game up as a cakewalk. “They only have Ronaldo” or “they tied all 3 of their games”. Much like Croatia, Portugal have underperformed at big tournaments. With the likes of Ronaldo, Pepe, Nani, and Quaresma Portugal have never been able to translate individual talent into a team effort.

Unfortunately, their last game proved that they still have the ability to score goals. Their team effort may be lacking, but we haven’t faced a team that has a true difference maker like Ronaldo. If you look at this from a neutral perspective, we are also going up against a mirror image of ourselves emotionally. Along with the comeback victory, this may be Portugal’s last opportunity to make a run with this generation of players.

Along with fear, comes hope. On paper, Croatia look to be the odds on favorite. Giving up 3 goals to a Hungary side that came out of nowhere, and another to the Cinderella story from Iceland, Croatia should be able to take advantage of Portugal’s defensive weakness. Depending on which Mandza shows up, we could see the scoreboard light up like a christmas tree.

Say what you want about Cacic, because I know I did, but it seems that the players are happier playing with a coach that focuses on basics and feel. Even though he’s had a few missteps with substitutions this tournament, he’s quietly let his stars guide the team for him. Aside from popular belief, Cacic put those youngsters in because of yellow card accumulation. We already knew that we had a strong chance to qualify, and we couldn’t risk Vida, Brozovic, or Badelj being left out for the round of 16. That being said, the performance of those youngsters against Spain proved that there is something special going on in that locker room.

Midfield: (Perisic, Rakitic, Modric, Badelj, Brozovic) Croatia’s biggest strength against any opponent. In this game especially, control of the midfield will be crucial in stopping the flow of the ball to Ronaldo. The Vatreni need to focus on only letting Ronaldo receive the ball from the back line. If we lock down the center of the pitch, our defensemen’s’ jobs become a lot easier.

Defense: (Srna, Vida, Corluka, Strinic) Strinic knows his career depends on his performance at Euros, and so far he’s been a very good selection on the wing. His distribution is lacking, but that job is left to Srna. No matter how well we play, the fate of our team lies on the backs of Corluka and Vida. Corluka has saved us in the final seconds of 2 matches, and aside from the handball I’ve loved Vida’s tenacity so far. Corluka has not practiced since Tuesday, so let us hope that he’ll be at least 90% ready to go with his kapa. Finally, Srna, may be targeted as a weak spot by the Portuguese. Even though his emotions have helped in the group stage, his speed is not something that can improve over night. Look for Nani and Ronaldo to go after that wing  as much as possible.

Forward: (Mandzukic) Mandzukic hasn’t bagged a goal just yet, but I think going against Pepe might actually be good for him. Mandza tends to get into what I call “cry baby mode”, in which he completely loses his form and direction. If he harnesses that pity party into anger, I wouldn’t be surprised if he bags 2 goals this game. If he doesn’t produce in the first 55 minutes, look for Kalinic to come in to replace Badelj.

Goalkeeper: (Subasic) He looked like he just got out of bed against the Czechs, but he was able to pull himself back together against Spain. Subasic hasn’t really had to face a lot of shots, aside from the last game. Let’s hope to God that he’s ready for CR7, and the danger that the other Portuguese players bring.

Keys To the Match:

1. Center of the Pitch: Control the center of the pitch, and we control the game. We’ve seen how frustration affects Ronaldo’s game, and we need to focus on that. He is their difference maker, and if we prevent him from getting simple balls through the midfield, we set ourselves up for a better opportunity to win.

2. Perisic/Wings: Perisic has been our best tournament player for the past 4 years. While the focus tends to fall on Modric, Rakitic, and Mandzukic, Portugal will look to have an answer on how to stop the seemingly unstoppable force. If Perisic gets locked up, we need to have an answer on the other side of the pitch to deal with it. Call me crazy, but I wouldn’t mind seeing Pjaca substituted for Broz in the second half if we don’t have a lead.

3. Keep Your Head: Going down 1-0 could be the best thing to happen to us. We’ve seen this team play lazy games up until the 80th minute, where we experience near cardiac arrest. If Portugal manage to hold a draw for 90 minutes, or go up early, we need to be able to regroup and react. On the other hand, if we grab a lead, that doesn’t necessitate parking the bus. We’ve seen how shaky things get when we start to get pressure towards the end of games. 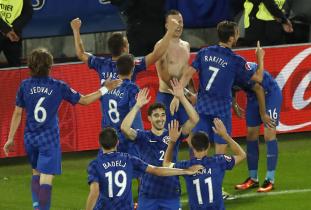 Croatia pull it off in epic fashion. 2 goals from Mandzukic and a goal from Vida.