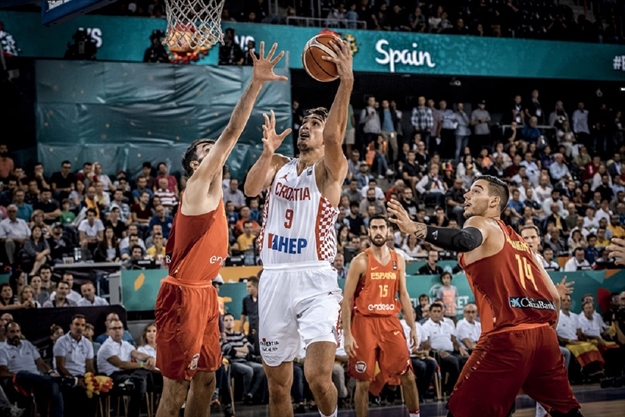 Croatia lost their first game of the EuroBasket group stage Tuesday in a 79-73 defeat to Spain. Philadelphia 76ers forward Dario Šarić led the team with a double-double (18 points, 13 rebounds) but it wasn’t enough as Croatia now look to finish second in the group before the knockout round begins this weekend.

It was a close game at the end and both players and coaches are happy with the performance Croatia put forth on the day against arguably the best basketball team in Europe.

Croatia defeated Montenegro 76-72 Monday behind another solid performance by Bojan Bogdanović (23 points) to remain perfect at EuroBasket 2017 with a 3-0 record. However, Tuesday is the big game as Croatia will face Spain for first place in the group. Both teams are undefeated but Spain have the superior point differential. The winner of the match will likely top the group heading into heading into the knockout round this weekend.

In their opening match, Croatia needed a big fourth quarter to get by Hungary 67-58 behind a 23-point, 7-rebound performance from Indiana Pacer Bojan Bogdanović. On Saturday, Croatia came out sluggish in the first quarter against co-hosts Romania, but eventually won big for a 74-58 final. Bogdanović was once again the leading scorer and is averaging 22 points through the first two games.

Croatia will look for more of the same against Montenegro before they face their biggest competition in group stage: Spain on Tuesday, September 5th. Croatia last played Spain in the group stage decider  at the 2016 Rio Olympics and won by two after Dario Šarić blocked Pau Gasol’s shot at the buzzer.