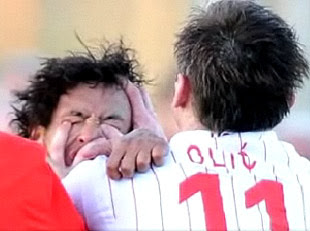 Ivica Olić’s ‘eye-gouging’ incident will cost him games against future club, Bayern Munich, as well as Karlsruhe when the BundesLiga returns from winter break on January 30th. Olić has also been suspended for three future friendlies. 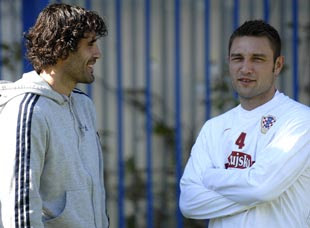 Robert Kovač waits out a possible transfer from Borussia Dortmund. Where to exactly? Try Dinamo Zagreb.

Initial reports indicated that Kovač would be entering ‘Bad Blue Boy’ waters by the end of the week. However, Dortmund manager, Jürgen Klopp, has said, “There is no way I am letting Robert go.” We will definitely know by week’s end as the transfer window closes on January 31st.

Robert, come to the MLS! I’ll pay good money to see those flying elbows of yours!

Since we last left you, the Premiership has taken a backseat to the FA (English) and Carling Cups. Tottenham faced off against Manchester United in the FA Cup 4th round at Old Trafford. Vedran Ćorluka played the entire game while Luka Modrić was subbed out at halftime.

Roman Pavlyuchenko gave the Spurs an early lead but it wasn’t Tottenham’s day as ManU ultimately won 2-1. Ćorluka appeared a bit absent minded as he let Berbatov run free on that second goal. Tottenham has now been eliminated from the FA Cup.

In a much less important Carling Cup match, Tottenham took on Burnley in the second leg of their tie. Ćorluka did not play as he got to catch up on rest and Modrić only played the first 65 minutes of the match. With Tottenham up 4-1 on aggregate, this game was supposed to be a ‘piece of cake’ for the Spurs. However, English Championship side, Burnley, ended full-time up 3-0 which forced extra time.

Roman Pavlyuchenko and Jermain Defoe saved Tottenham with a goal apiece in extra time. The Spurs are currently on the cusp of a relegation spot in the Premiership and have not looked all that impressive in recent weeks. Luka Modrić is finally meshing with his offense but appears to be afraid to shoot the ball within 25 yards of goal. Ćorluka remains to be a brick wall on defense as he has easily become a ‘Top 10 Defender’ in the world.

Niko Kranjčar sat out Portsmouth’s 2-0 FA Cup loss against Swansea City. He has not seen the pitch since his late game substitution vs. Tottenham on January 18th do to a minor knock. Niko has also been ruled out of Croatia’s friendly in Romania.

It also sounds like Kranjčar will be leaving Portsmouth in the summer- most likely to join Eduardo at Arsenal.

Danijel Pranjić converted a penalty in Heerenveen’s 2-0 win against Roda Kerkrade. He also started the play which lead to the first goal of the game. Pranjić is playing extremely well for Heerenveen. He should have already moved to a bigger club but his price is too high right now. A summer transfer for Danijel is now inevitable as he will stay in the Netherlands for the remainder of the season.

Ante Rukavina received a straight red card in the 53rd minute of his latest game against Ergotelis. Panathinaikos lost the game 1-0 as Ergotelis scored just three minutes after Rukavina suffered the red.

The video isn’t clear, but it appears that Rukavina hit an Ergotelis player in the body. Further suspension is unknown at this time. If anyone has any further information or can read Greek, let us know.

Current Croatian 3rd string goalkeeper, Mario Galinović, could not stop the lone goal of the game as his defense broke down. Regardless, Mario is playing fantastic alongside Rukavina for Panathinaikos.

Ivan Jurić had to sit out Genoa’s 1-1 draw against Catania on January 25th due to accumulating too many yellow cards thus far in the season. He should be back in action on Wednesday the 28th to take on AC Milan at San Siro. Genoa is also in contention for a 2010 Champion’s League spot as they currently sit 4th in Serie A. So keep an eye out for them.

Jurić should also be the only new Croatian face in the lineup for the friendly against Romania on February 11th. Bilić will name the official squad later this week.

~Ante Kvartuč, reporting from a van down by the river~