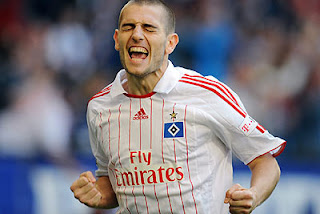 Mladen Petrić didn’t forget to bring his scoring boots to the game on Sunday as he put two in the back of the net to help Hamburg stay in title contention with a 2-1 win over Hannover. Petrić apparently couldn’t wait to get started as he volleyed in a cross-field lob only seconds into the game. It was definitely one of Mladen’s better goals this season. 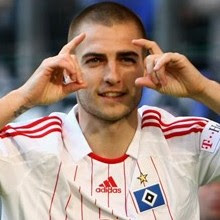 Petrić secured his double with an ‘Ivica Olić rebound goal’ midway through the second half. It wasn’t as nice as his first goal but it got Hamburg the win. Speaking of Olić, he was subbed into the game with 15 minutes left but didn’t receive a solid chance on net as Hannover were pushing hard to tie the game. Hamburg currently sit in third place but only three points behind leaders Wolfsburg, with six games left to play. 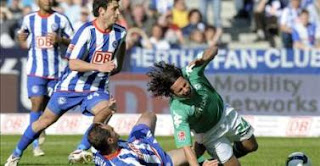 Josip Šimunić scored a beautiful header off a cross to tie up the game late for Hertha Berlin in their Sunday matinee against Werder Bremen. With Hertha desperately needing to claim maximum points to stay in title contention, Šimunić came through like no other. Hertha ultimately won the game in the 87′ when the Bremen defense committed a fatal error in losing the ball deep in their own zone. Hertha Berlin now sit in fourth and five points behind leaders Wolfsburg on the scoring power of unlikely candidate, Mr. Joe Šimunić. 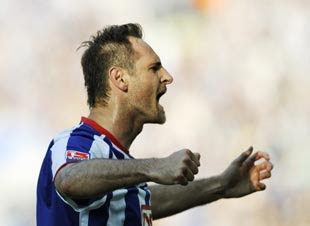 ŠIMUNIĆ IS PUMPED UP!

Marko Babić was not included in Hertha Berlin’s squad for this match.

Ivan Rakitić rode the pine the entire game for Schalke in their 4-0 dismantling of Energie Cottbus. There’s only six more games for Rakitić with Schalke this season before he can test the European transfer market this summer. 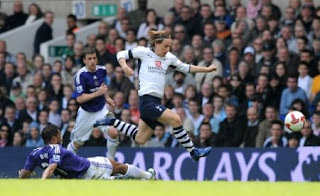 Luka Modrić and Vedran Ćorluka had an easy day against Newcastle United as Tottenham won 1-0. The Spurs dominated the entire match and gave Newcastle very few chances. Modrić ran the field well and put a nice ball into the box which lead to Tottenham’s goal. Luka once again received ‘Man of the Match’ honors. I know I say this every week; but Luka is becoming the real deal in the Premiership. I can’t wait to watch him play with the experience he now has next season. 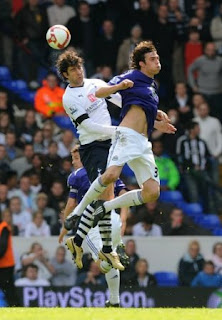 Ćorluka basically had the day off as Newcastle couldn’t do anything offensively. However, Ćarli did miss a couple of easy passes during the game. It’s not a big deal but will only add to his reputation lately of not giving 100% while playing in England.

Tottenham now sits on 44 points with only five games left. They are one point behind West Ham for a 2009-10 Europa League spot. The Spurs have caught fire winning six of their last eight and should finish the season strong giving West Ham and Fulham trouble for the right to play in Europe. 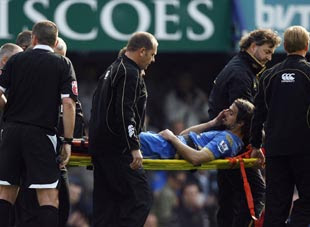 Niko Kranjčar had to be taken off the pitch on a stretcher Saturday afternoon after he appeared to have rolled his ankle after a bad tackle. Reports say that it is not that serious and Niko should be back in a few weeks. There is no danger to his availability for Ukraine in June.

Moments after the Kranjčar injury, Portsmouth scored an all-important goal to beat Bolton 1-0. Pompey can now breath a sigh of relief as they seem to have beat relegation worries- for the time being. 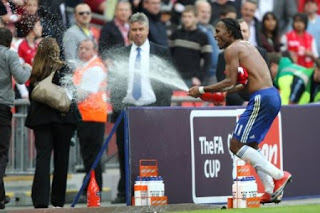 DROGBA CELEBRATING AFTER THE MATCH

Eduardo was merely a spectator in Arsenal’s 2-1 loss to Chelsea in a FA Cup semifinal match at Wembley on Saturday. Even though Eduardo was an available substitute but not used earlier in the week against Villareal, it’s a surprise to me that Arsenal manager, Arsene Wenger, did not utilize ‘Dudu’ in the same role against Chelsea.

I think it’s now safe to say that we shouldn’t expect much more from Eduardo this season. Wenger looks to be keeping him sharp in practice sessions but ultimately saving Eduardo for next season. Every time ‘Dudu’ makes a recovery he seems to pick up another injury. 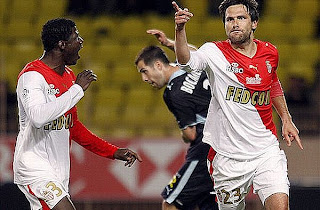 Jerko Leko converted a penalty kick for Monaco’s first goal in their 3-1 win over Stade Rennes on the weekend. He also added a yellow card to his match resume- no surprise there. With six games left in the French season, Monaco should end up in the middle of the pack without a chance to play in Europe next season.

Nikola Pokrivač came into the game in the 88′ only to witness Monaco’s final goal in injury time first hand. Dario Šimić was not included in the roster for this match. He sat out last week’s game due to a red card suspension. 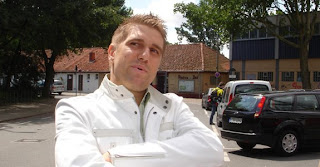 Ivan Klasnić was left out of Nantes’ squad for their 2-0 win against Nice. ‘Killer’ could have been taking care of some legal business regarding doctors at his old club, Werder Bremen. KLASNIĆ LAWSUIT.

Thank you Ivica for bringing this to our attention. You are the first member to break the CSR v2.0 plateau. 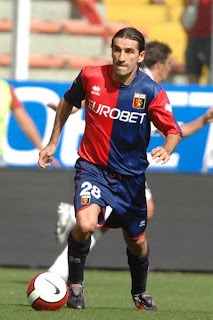 Ivan Jurić and Genoa couldn’t keep the magic going as they lost to Lazio 1-0. Genoa played without star striker, Diego Milito, which accounted for them not being able to finish attacks. Lazio scored on a quickly devised counter-attack and Genoa couldn’t respond with numerous chances. Luckily for Genoa, Fiorentina was beaten by Udinese and still trail Genoa by two points for the final Champion’s League spot.

Jurić played well once again and received yet another yellow card for a late tackle. His role for Genoa is to roam the midfield while enforcing his presence. He creates contact with the opposition on nearly every play. Although he has yet to play a ‘real competitive’ game with Croatia, I doubt he will be able to mirror his role for Croatia as international football demands for more of a ‘bunkered defense’.

Will Jurić get a starting spot over Vukojević against Ukraine in June? 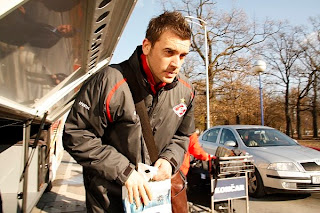 Is there trouble in Moscow? Stipe Pletikosa’s new manager benched him in Spartak’s 2-0 win over Terek Grozny. We’ll have to wait until next week to find out if this was a one-time occurance or if Pletikosa is officially Spartak’s backup. 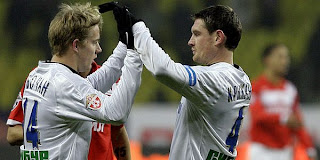 Ivica Križanac and Zenit St. Petersburg managed a 1-1 away draw to Lokomotiv Moscow. Križanac received a yellow card early in the second half and was subbed out of the game in the 85′. As most leagues in Europe are approaching the end of the season, Russia is only five games into theirs. Defenders need to stay well rested and out of card trouble early in the season. It’s a marathon, not a race! 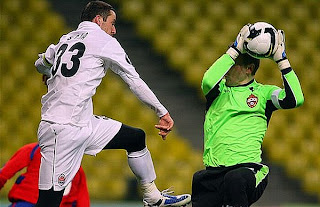 Darijo Srna received ‘Man of the Match’ in Shakhtar’s 2-1 win over city rival, Metalurg Donetsk. Shakhtar seems to be heating up at the right time even though they are stuck in second place; 12 points behind leaders, Dynamo Kyiv, with only six games left. Even though Shakhtar will not catch Dynamo for the Ukrainian league title this year, they will have a shot at their hated rivals when the two face off in the UEFA Cup semifinals on April 30th and May 7th.

Ognjen Vukojević and Goran Sablić played the entire game for Dynamo Kyiv as they were shocked by Kryvbas Krivyi Rig 2-1. It looks as if Dynamo is getting lazy towards the end of the season, but this is only a small bump in the road for them as they have basically locked up their 13th Ukrainian Premier League title. They are 12 points up on Shakhtar Donetsk with only six games left to play. 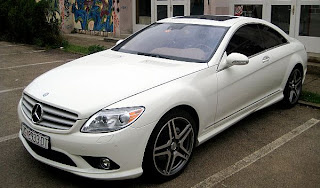 Mario Galinović and Ante Rukavina had the weekend off as Greek football took a break before they wrap up the season next Sunday. Panathinaikos must win against OFI Crete and pray for a PAOK Salonika loss or draw next week to gain a 2009-10 Champion’s League spot.

So what was Ante Rukavina doing with some free time this weekend? He was busy getting drunk driving charges slapped on him in Šibenik. Police reports said that Rukavina blew a 0.61. I’m not sure if Europe is on a different ‘Blood Alcohol Level’ than the States, but if Ante did in fact blow a 0.61 while driving; he’s insane! Is Rukavina depressed that Bilić won’t give him a call up and is taking it out on bottles of booze? Don’t look for Rukavina to be driving in Croatia anytime soon as his license has been suspended. 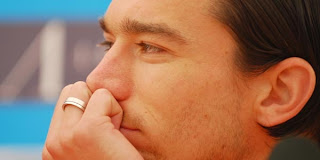 Danijel Pranjić sat out Heerenveen’s 2-1 loss at FC Utrecht for receiving a red card in last week’s game. Heerenveen is slowly crumbling as they now sit fourth in the Dutch Eredivisie. Will Pranjić be back next season though?