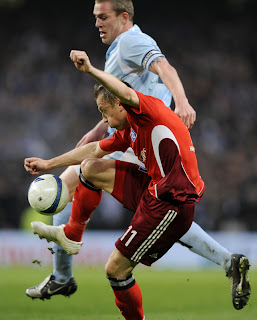 Ivica Olić and Hamburg lost to Manchester City 2-1, but move onto the UEFA Cup semifinals on a 4-3 aggregate advantage. Olić played the full match and could be given an assist for Guerrero’s goal in the 12′ as he got a heel on the ball causing it to deflect right before his Peruvian teammate slotted a goal for an early Hamburg lead.

Olić had many solid chances at goal but was denied time after time. It was another fantastic effort by Olić. He will be challenged next by German club, Werder Bremen, in the semis. Mladen Petrić came on as a 73rd minute sub and drew a foul against Man City’s, Richard Dunne, which was his second yellow of the match and forced City to play a man down for the last 15 minutes of the game. Petrić had few good looks on goal but more importantly appears to be 100% healthy. 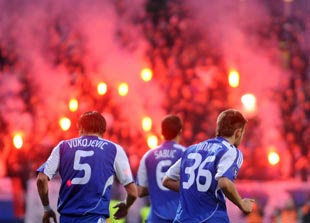 After a 0-0 first leg draw in Paris last week, Ognjen Vukojević, Goran Sablić and Dynamo Kyiv returned home to finish off business against French side, Paris St-Germain. It was all Kyiv in this lopsided affair as they went up 2-0 only 16 minutes into the match. Both Croats played the full 90 minutes in what was an easy win for the Ukrainian side. Vukojević was all over the place slide tackling the opposition on almost every play while Sablić did very little as he did not receive many touches on ball.

KYIV 2-0. A SAD DAY FOR THE FRENCH KEEPER

This match was embarrassing and mentally exhausting to watch. A complete mental blunder by the PSG goalkeeper gave Dynamo the game early as he punched the ball into his own net. The game could have easily been a 6-0 blowout but Dynamo sat back and conserved their energy. Dynamo Kyiv will now play fellow Ukrainian side, Shakhtar Donetsk, in the UEFA Cup semifinals.

There will be a Croat in Istanbul for the UEFA Cup Final; but which one?

VUKOJEVIĆ SEALS THE DEAL FOR DYNAMO

Ognjen Vukojević scored a late insurance goal in the 61′ making it a 3-0 win for Dynamo. Vukojević slotted in an ‘Ivica Olić-like’ rebound as he was in the right place at the right time when the PSG keeper couldn’t handle a zipping free kick. 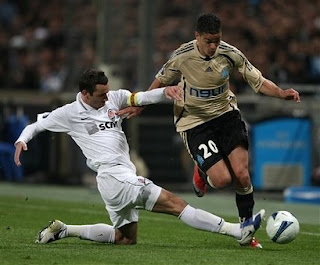 Darijo Srna and Shakhtar Donetsk took care of business as they beat Marseille 2-1 Thursday evening and 4-1 on aggregate. Srna played the full match and once again managed to put many crosses right in the box. Shakhtar will now play Ukrainian arch nemesis’, Dynamo Kyiv, in the semifinal round.

SHAKHTAR’S FIRST GOAL OF THE GAME

In Champion’s League news, Eduardo was made an available sub for Arsenal in their 3-0 win over Villareal on Wednesday but did not see the pitch. Arsenal will now face current World Champions, Manchester United, in the UEFA Champion’s League semifinals.