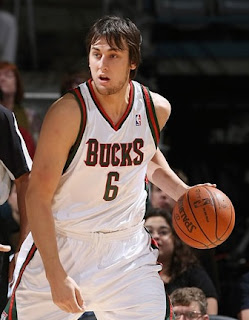 It was said that when Roko Ukić left the NBA in 2009 for greener pastures in Turkey, that there was no longer any trace of Croatian blood in the league for the first time in almost two decades. Well let me tell you first hand- this is not true.

Andrew M. Bogut, an Australian-born Croat who was the first overall pick in the 2005 NBA draft, was always known to have a Croatian background, even though no one thought much of it as he plays for team Australia. Bogut recently sat down with CSR to uncover his Croatian roots and show us exactly how Croatian he is.

Since the early 90’s Croatia has had a handful of players in the NBA. Dražen Petrović showed up on the scene in 1989, followed by Stojko Vranković in 1990, with Toni Kukoč and Dino Rađa debuting in 1993. 2005 saw five players represent Croatia including Gordan Giriček, Mario Kasun, Toni Kukoč, Zoran Planinić and Bruno Šundov.

But when Roko Ukić left the Bucks earlier this season for the Turkish league, it seemed that for the first time in 20 years that Croatia would not be represented in the NBA. Not true! After doing some investigating, CroatianSoccerReport.com has learned that Miliwakee Bucks’ center and the 2005 first overall pick, Andrew Bogut, is in fact Croatian.

Australian-born Bogut, who attended the University of Utah and who currently has a $10 million per year contract has most of his family in Croatia including his grandfather in Zagreb.

“I grew up in a Croatian home in Australia,” said the 25-year-old Bogut. “I grew up speaking the language, eating the food, listening to the music and going to Croatian clubs every weekend in Australia,” he said.

He rattles off Croatian artists in his iPod without hesitation. “I have everything from Thompson to Colonia, Zlatko Pejaković, Škoro….I pretty much have everything,” he said, adding that he likes the old stuff as well. “I like Dugme.”

“My father is from Osijek and my mom is from Karlovac,” said Bogut in the visiting locker room before a recent game against the Los Angeles Clippers. “I still have a lot of family in Zagreb and Osijek. I go to Croatia every year. All the family and all the blood is there.” He is even the godfather to his aunt’s new baby in Croatia.

A rumor had it that Bogut even had a Dinamo tattoo on his back, however, he confirmed that although it’s not true, he does have a tattoo that represents elements of Croatia. “I’ve got a mix of things, all mushed together,” he said, including a depiction of the grb and Kralj Tomislav.

Bogut visits Croatia regularly and has even recently purchased an apartment in Novalja on the island of Pag. He says that he gets recognized when he visits Croatia but that he gets treated with respect. “People don’t just run up to me, grab me, and want this and want that. People say hello and I talk to people just as a regular guy. I really respect the Croatian community and Croatia, especially for that, they are very respectful, but yeah, a lot of people know who I am. I stand out, I’m seven foot tall, so people kind of guess I’m basketball and they put two and two together and figure it out.”

Bogut reveals that he almost went to Croatia to play for Cibona at the age of sixteen. “In Australia I ended up trying out for the league academy. My father and I made the decision that if I did not make that academy I was off to Croatia. I had it all planned out. I ended up making that academy so I did not go. It could have easily turned the other way.”

JERRY STACKHOUSE LEARNS HOW TO ‘PASS THE BALL’

In addition to being a huge fan of Dinamo, Bogut follows the Croatian National Soccer team and admits to rooting for them over Australia during the 2006 World Cup Match between the two teams. “It’s a tough decision for me because it was Australia’s first important game,” he said of Australia’s first World cup tournament in his lifetime.

He says he grew up supporting Croatia since 1998. “All of the sudden before the draw was even announced, I’m like, ‘I bet you…’ that they would get put together.”

Even though Bogut was only teammates with Roko Leni Ukić for three short months, he says they got along and spent time together. “We were pretty close, we spoke Croatian, we got food and lunch and dinner on the road. I look forward to talking to him in Turkey” he said, where they will meet for the World Championships.

When asked whether he will visit Croatia after participating in the World Championships in Turkey, he replies, “Definitely. I just bought an apartment on Pag,” he laughs.

Bogut proved that there is no doubt that he fell from the Croatian tree and that he is a representative of Croatia in the NBA. So put on your checkers and go root for him and the Bucks next time they come to town.

CSR WRAPS IT UP AT STAPLES CENTER