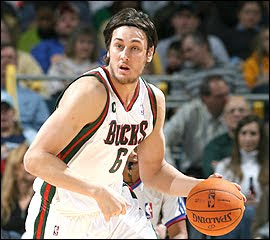 CroatianSoccerReport.com has received credentials from the NBA to cover the Los Angeles Clippers-Milwaukee Bucks game on Wednesday, March 17th at Staples Center. Andrew Bogut, who was born to immigrant Croatian parents in Australia, is the only player in the NBA today with Croatian roots.

Bogut, a first overall NBA draft pick in 2005, is a Dinamo Zagreb supporter even though he was raised in Australia. It is even rumored that he has a Dinamo tattoo on his back.

Our mission: To uncover Andrew Bogut’s roots as a Croatian. Why is he a Dinamo fan? How often does he go back to Croatia? Why did he choose the Australian basketball team over Croatia?

We are hoping that a brief interview before the game can go on as planned while we ask you, the CSR reader, to give us some questions you would like answered by the Croatian-Australian basketball player just as we did for the Igor Štimac interview.

During the game, there will be 32 Croatians (mostly Hajduk fans that hail from Dalmacija) in attendance to cheer (and jeer) Bogut. It will be a night to remember for Croatians. Catch the game on Fox Sports West to hear us chanting or watch an episode of ESPN Sportscenter later that night; we should make the cut if we play our cards right.