Who would have thought that Rijeka would have more points than Dinamo Zagreb through the first four Europa League matches? Well, it happened Thursday night as Dinamo fell 2-0 to PSV Eindhoven in the Netherlands while Rijeka came back to draw Lyon 1-1 at Kantrida. It didn’t start pretty for Rijeka as a complete blunder on defense following a Lyon corner kick led to the game’s first goal.
Alassane Plea easily knocked in the ball in the 14th minute after the Rijeka defense could not clear the ball out of the box. In big matches such as this one, the European debutants simply need to do better.

However, Andrej Kramarić came to the rescue seven minutes later, absolutely blistering the ball upper-V from 30 yards out. It was such devastating shot that the Lyon goalkeeper remained frozen. But another goal would not come for Rijeka as they only managed another two shots on goal during the match. With the draw, Rijeka remain undefeated at home in the Europa League but still remain four points behind second place Lyon for a knockout berth. They host Portuguese club Vitoria de Guimaraes on November 28th. 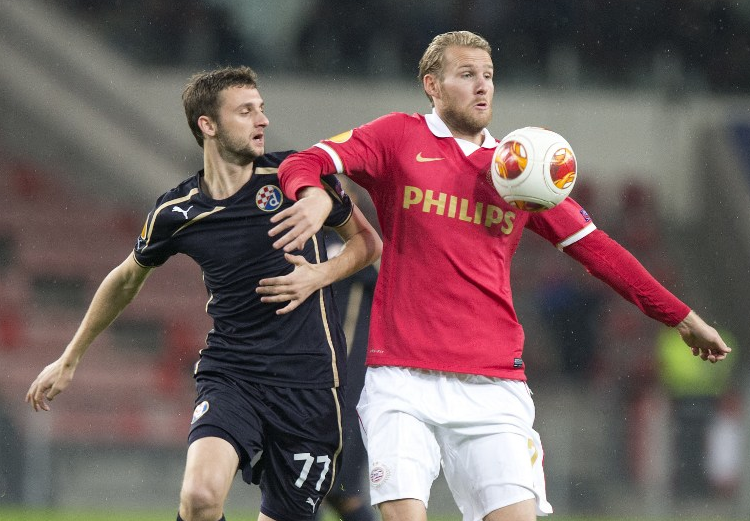 After four games in Europa League, Dinamo is done. Needing a win Thursday night against PSV Eindhoven, the Croatian champions lost 2-0, ending their European season with two matches remaining. Is it just a non-Champions League hangover or is Dinamo on the decline. After expecting to make it to the Europa knockout stages and only having a two-point lead on Hajduk nearly halfway through the season, is Dinamo’s reign finally over?