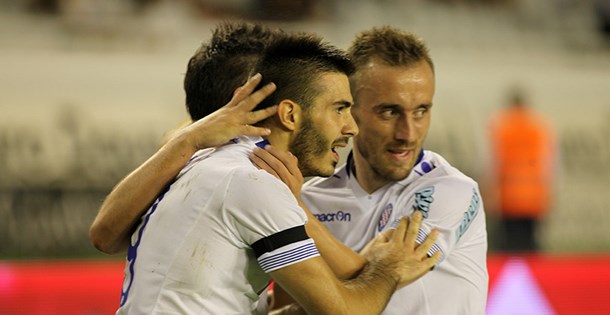 Hajduk Split played an honorable match in Ukraine today, but succumbed to a defeat to the Ukrainian league runners up.  Hajduk held the lead for a short moment in the 47th minute when Tino-Sven Šušić put away the rebound from close range to put the Bili up 1-0, and got Hajduk the all-important away goal.

But former Hajduk Split striker, Nikola Kalinić quickly answered back three minutes later to tie the match.  Hajduk held on to the draw nearly until the end, but Dnipro deservedly scored a second goal in the 88th minute to wrap a win at home.

But it is not over yet.  The second leg is still to come at Poljud next week. If Hajduk can match the effort they put forth in today’s match, and in front of their own fans no less, they still have a shot at advancing to the group stages of the Europa League for the first time since 2010.

In 2010, the last time Hajduk Split played in the Europa League group stage, Ante Vukušić scored a 95th minute goal to defeat Belgian club Anderlecht 1-0. Although Hajduk were long shots to finish top-2 in the group and advance, the goal brought so much joy, pride and energy to Poljud and the city of Split that September 30th night. Two years later, Hajduk hosted Inter Milan in a qualifying match, and although losing 3-0, they rebounded in the return leg to win 2-0 at San Siro. They may not be able to hang with the big boys in Europe, but Hajduk has surely had their moments the past few seasons.

Fast forward to 2014 where Hajduk came back after a 4-2 away defeat to Shakhter Kragandy to win 3-0 at Poljud in the third qualifying round.