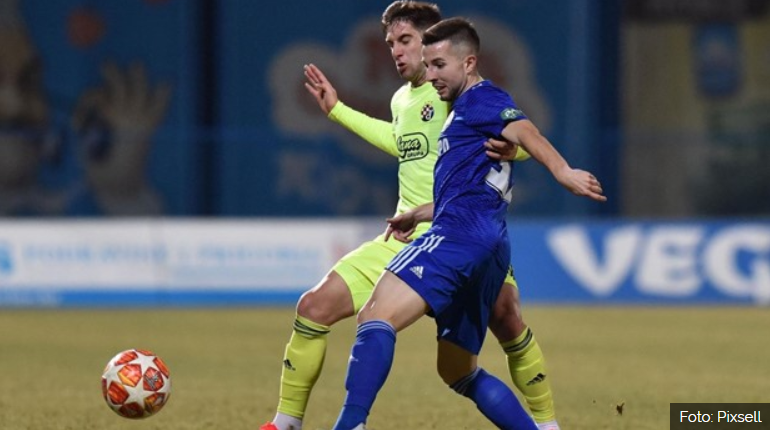 The HNL Has survived another Croatian winter and returned Friday with its usual triumph and glory.

The match week kicked off between Inter Zaprešić who welcomed NK Istra 1961 with a 2-0 defeat thanks to Josip Mitrović and an own goal scored by Petar Bošanšić.

The January transfer window made little impact on either side who together brought in three players without spending transfer money. Most notable, Hajduk Split goalkeeper, Tomislav Duka, was brought on to Istra on a free transfer, but was an unused substitute in Friday’s match. Inter Zaprešić welcomed 23-year-old Moroccan winger Oussama Zamouri from Oxford United FC on a free transfer. He made his debut for the club as an 82nd minute substitute.

Saturday’s match ups featured a 2-1 victory for Lokomotiva over HNK Rijeka and a 2-0 win for Dinamo during a visit to Koprivnica.

Lokomotiva took advantage of the January window with the acquisition of Dominik Kovačić from Siroki Brijeg. The 26-year-old Zagreb native plays center back while 34-year-old Serbian striker Đorđe Rakić also joined the club for an undisclosed fee from PS Kalamata.

Rakić made his first appearance for the club as an 88th-minute substitute, but the match was already won by Lokomotiva, who went ahead 2-0 after two goals from Kosovoan Lirim Kastrati. Rijeka’s Stipe Lončar scored his side’s consolation goal in the 86th minute.

Rijeka brought in no new players, but did welcome home Jasmin Celiković from his return on loan to Zrinski Mostar.

The most notable transfer of the window was of course Dinamo Zagreb’s Dani Almo’s move to Bundasliga side, RB Leipzig. The Spaniard, who made a massive impact during his time with the Modri, brought in a transfer fee of 20 million euros, which makes him the third most-expensive player to come out of Dinamo after Marko Pjaca and Luka Modric.

Despite being without a star player, Dinamo easily routed Slaven Belupo 2-0 after Luka Ivanusec scored his second goal for Dinamo and Bruno Petković scored his fifth in the league this season.

Center back Vinko Soldo was sent to Slaven Belupo on loan from Dinamo, but remained an unused substitute against his parent club, as did fellow new-comer Niko Havelka.

Sunday’s match featured a 3-0 blowout victory for Hajduk Split over NK Varaždin. Prior to the match, Varaždin coach Luka Bonačić was quoted saying if he doesn’t get a result in his first three matches after the break, he will resign.

Well, Luka, that’s one down.

Varaždin made efforts in January bringing in journeyman Denis Glavina, who previously spent time at Varazdin in 2012 as well as time with Dinamo and numerous clubs in Ukraine and Kazakhstan. Matija Spičić was also acquired from HNK Gorica on loan. Spičić spent all 90 minutes on the pitch for Varaždin while Glavina was subbed off in the 46th minute for 36-year-old Leon Benko.

Hajduk Split brought in no new players, but still managed to tally two penalty goals (Mijo Caktaš and Samuel Eduok) and a third goal from Bassel Jradi. The win furthered their quest for second place in the league over Osijek and Rijeka.

HNK Gorica held NK Osijek to a scoreless match during the weekend’s final activity. Neither side made any additions to its squad and split the points after the draw. Osijek moved to up to third place with the added point while Gorica fell to sixth. 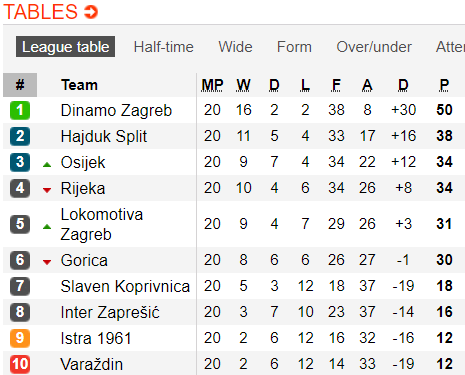