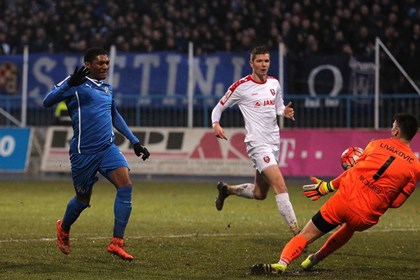 Dinamo is continuing its six-game winning streak with another victory on Sunday against Zagreb on a nearly unplayable pitch at Kranjčevićeva.

The abysmal field conditions only set an even better stage for the controversy that was to come midway through the second half.

Zagreb started the match with a stunning performance that left Dinamo scratching their heads at half time.

Lovro Medić put the poets in the lead in the 30th minute after he beat Eduardo from inside the six-yard box.

Medić gave his team hope for their first league win since November, but the hope would not last.

Bunkering down against Dinamo was not enough for the Poets. Dinamo came out in the second half determined to redeem their efforts.

Their hard work paid off when Junior Fernandes found the back of the net in the 63rd minute to tie the match, but the woes were not over for Zagreb yet.

Controversy is never far from Dinamo Zagreb, and the night at Kranjčevićeva was no different.

Three minutes went by after the goal before Bernardo Matic apparently pushed down Damir Sovšić in the penalty area.

A closer look at the decision left many skeptical about whether it was too harsh of a judgment, but nonetheless, Dinamo was awarded the penalty kick, which they turned into their second goal of the match via Armin Hodzić’s foot.

Dinamo started the evening chasing Rijeka for the top spot in the table. By the night’s end, Dinamo once again reigned on top, leading the league by two points following a 2-1 win. 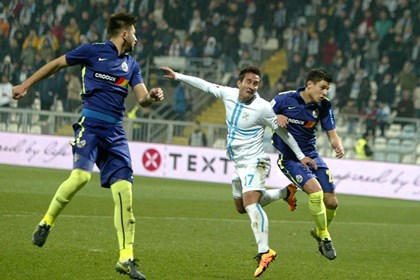 But Rijeka isn’t going away quietly, or even going away at all for that matter.

Despite the departure of players such as Josip Radošević, Vedran Jugović, and Anas Sharbini, Rijeka continues its offensive prowess against a reinforced Lokomotiva side.

Rijeka opened up the second half of the season with a 2-0 win over the Lokosi on Frrday afternoon.

Despite open play and several well-taken attempts on net, Lokomotiva were unable to get on the scoreboard.

Rijeka on the other hand made the best of their opportunities and opened the scoring in the 18th minute.

Marin Tomasov scored the first goal of 2016 after tapping the ball over the head of Oliver Želenika.

It was a foot race to the ball between Želenika and Tomasov, but Tomasov burst toward the ball too quick for the goalkeeper and was able to get just the right touch to finish the play.

The ball was sent from a field-length kick from goalkeeper Ivan Vargić, who racked up an assist in the match.

Gavranović converted a cross sent in by Roman Bezjak to score the second goal of game in the 25th minute.

With win, Rijeka is now two points behind Dinamo. The two clubs will face each other next week at Maksimir on Sunday. 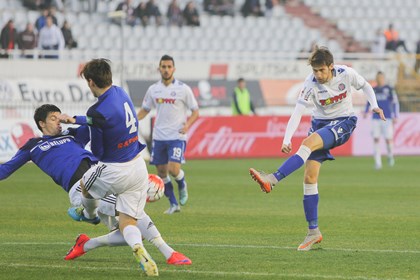 HNK Hajduk Split celebrated more than a new year on Saturday, but also celebrated their 105th birthday in style at Poljud with a 2-0 win over Slaven Belupo.

No Balić, no Caktaš, no problem. When it came down to it, the “new” Hajduk was able to break the tough stance of Slaven and score two goals in the come out with a happy birthday.

Slaven gave the Bili a tough opponent in the first half, leaving Hajduk with little options or ideas.

Though in the final minute of the first 45, Hajduk cracked the code against the Pharmacists and opened the scoring.

The late first-half goal proved that Hajduk is still a contender in the league. Tino-Sven Šusić struck for the Bili neat the top of the penalty area to beat the keeper with a strong shot.

Hajduk struck again in the 76th minute with a goal from Zoran Nižić. The Split native gave the fans what they were looking for on that special day; a convincing win at home and three points to celebrate with.

Nižić’s goal came from a classic short corner play. Nicolas Velez sent in the cross from a much more accessible angle and Nižić became the tallest man in the box when he went up to meet the ball with a strong header.

Hajduk ended the match in a calm and collected manner, holding possession until the final whistle blew.

Hajduk are in the hunt for the top spot, but remain four points behind Rijeka and six points behind Dinamo. They also rest above RNK Split, a head by nine points. 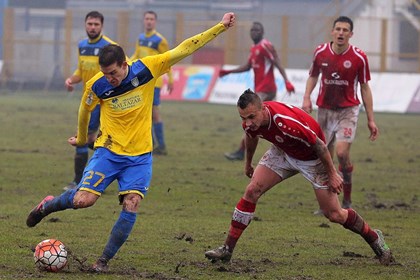 A fierce battle in Zaprešić took place on Sunday against Inter and RNK Split.

The field at Stadion ŠRC Zaprešić was still reeling from the abuse it took on Wednesday when Dinamo and Inter abused the rain-soaked pitch that created an mud-bowl atmosphere Saturday that ended in a 1-1 draw.

Inter got on the board first with a long-range shot from Andrea Ottochian in the 41st minute.

Inter buried themselves in the mud – so to speak – trying to keep Split off the scoreboard, who were knocking at the door for the remainder of the match.

Just when three points looked to by going the way of Inter, Split’s Ivan Pešić tied the match with his 84th minute goal.

The teams were unable to break the deadlock in the remaining minutes in such poor field conditions and were forced to take one point each. 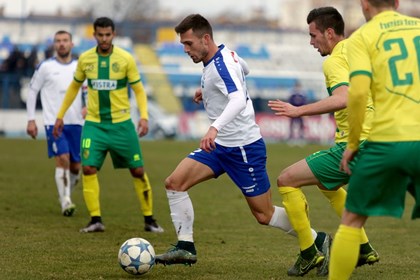 NK Osijek welcomed NK Istra 1961 to the Garden City on Saturday and the ending result was a 0-0 draw.

It was a well-deserved draw for both clubs, and a warm welcome to the new owners of Osijek, who signed their names on the dotted line earlier in the month.

Istra also tested the waters with their new coach on Saturday. Both clubs ended the match with a clean sheet, but still continue their offensive struggles. 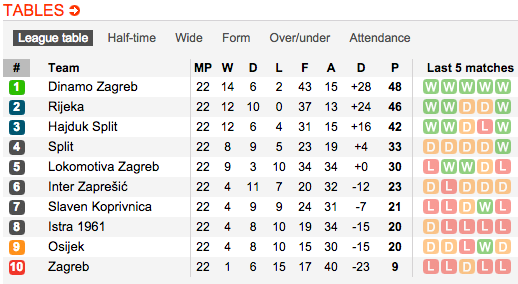